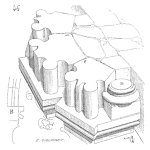 The view of the population we have is via the sample taken. We will make a decision based on the sample and determine if we accept or reject the null hypothesis.

This set of four possible outcomes is often presented as a two-way decision process as so:

When the actual null hypothesis is true and our sample indicates that is the case, that is a reflection of what is correct. We may denote this with $-1-\alpha-$.

When the actual null hypothesis is false and our sample indicates that is the case, that is again a reflection of what is correct. We may denote this with $-1-\beta-$.

When the sample leads to a decision that conflicts with what is true for the population, we have an error.

This error is also called the producer’s risk and often indicated by the level of significance denoted by $-\alpha-$. Determine $-\alpha-$ as a risk of incorrectly rejecting the null hypothesis. If we would accept that 1 in 20 times the sample drawn would result in this error, we have a risk of 1 in 20 or 0.05 or 5%.

We often approach this risk by stating what confidence we desire in the sample. A 95% confidence equates a 0.05 level of significance since $-C=\left(1-\alpha\right)100\% -$.

When All is Correct

The other two regions of the two-way decision process described above are when we get the decision right, in other words matching the unknown reality.

When preparing to conduct a hypothesis test we often only consider the level of significance or confidence and allow the power to be whatever it turns out to be for the selected sample size. We can set $-\beta-$ yet it is impossible to minimize both $-\alpha-$ and $-\beta-$. The two errors are inversely related. Thus for a fixed sample size increasing one proportional decreases the other.