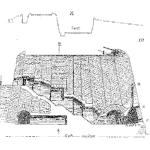 Hypothesis testing of data may include two populations that have un-equal standard deviations. The t-test for differences considered in a previous post used the assumption of equal variances to pool the variance value. In this test, we want to consider if one population is different in some way than the other and we use the samples from each population directly even if the population have difference variances.

We are considering the two population standard deviations are not the same. You can use the F-test hypothesis test to check this assumption and if they are similar enough you might be better served with the paired comparison assuming equal variances.

We calculate the test statistic using

where, degrees of freedom is a bit more complex (the Welch-Satterthwaite formula) and is

The critical value (or rejection region) for the three tests given a (1-α)100% confidence level becomes:

Let’s say we have two processes creating the top tubes of bicycle and we want to know if the two processes differ. The weight is important so we measure 5 tubes from each process. After checking the found the variances are not equal (or suspected to be difference due to an improvement in the process).The data follows:

The degrees of freedom used to determine the critical value is DF = 5.83 = 5

which rounded down provides an increase to the confidence level.

Since 2.571(critical value) is larger than 2.440 and in the rejection region, the null hypothesis is rejected. This means there is convincing evidence the two process do not create the same weight fork tubes.