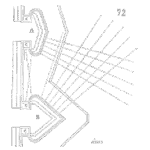 Statistics is the language of variation. Everything varies, and we use variance (σ2) to describe the spread of the data. For any experimental work aimed at making improvements, whether in the design, manufacturing process or field performance, there are two ways to make improvements. Move the center of the distribution, or reduce the spread of the data.
The ability to determine changes in variance is the subject of hypothesis testing for variance. In this first case, we will explore the situation where the variance of the population is known. In another post, we will discuss the case when we do not have a defined or known variance.

The χ2 distribution supports the hypothesis test statistic. Population variance distributions are described by the χ2 distribution; therefore inferences about single population variances may use the χ2. For the serious student, please reference a statistical-theory text to understand this connection.
Let’s say we want to compare a variance, σ2x, to a fixed value, σ2o. Like other hypothesis tests, we have three comparisons possible. The null hypothesis, Ho, could be equal to, greater than, or less than the fixed value, σ2o. The alternative hypothesis, Ha, defines the contrary conditions.

The three cases then are:

1. The population variance is equal to a fixed (given) value.

2. The population variance is less then or equal to a fixed value.

3. The population variance is greater than or equal to a fixed value.

The test statistic is given by

σ2x is the known population variance

n is the number of samples measured

s2 is the sample variance.

The test statistic is compared to a critical value, χ2α, or χ2α/2 based on the significance level,α and for two or single-tailed test, respectively. The hypothesis test evaluating if the sample is equal or not is the two-tailed test, the others are single tail tests.
The χ2 distribution requires determining the degrees of freedom for the sample. It is just one less than the sample size, n, thus d.f. = n-1.

In the design of the molding process for a seal, an experiment explored reducing the variability of the resulting tensile strength of units produced. The goal was to have four σ tensile variation less than or equal to 60 psi 95% of the time.
The team determined the appropriate setting for the molding process and created eight seals. The tensile strength testing resulted in a tensile σ of 8 psi. Does the team have a good enough production setup? Validate with 95% confidence.

Assuming the variation of tensile strengths from the process is normally distributed, we can use the χ2 hypothesis test. A four σ spread encompasses approximately 95% of occurrences. The target range is 60 psi or less over a four σ range, thus the standard deviation, σ, is 60 / 4 = 15.
The null and alternative hypotheses are:

The degrees-of-freedom is n-1 = 8-1 = 7. Because the sample variance is less then the target value, and we are seeking to determine if the sample shows a variance that is lower than the target, we use the lower tail for the χ2 distribution. Enter the sample with the degrees-of-freedom and 95% confidence to determine the critical value of 2.17. This means the calculated value if from the same population (not one that has a lower variance) would have a calculated χ2 value less than 2.17 only 5% of the time.
The calculated statistic from the sample is:

Comparing the sample value of 1.99 to the critical value of 2.17, shows that the team accomplished the goal of a tensile strength variation below the target.