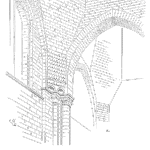 When a control valve or manual valve is shut fast in a full pipeline of moving liquid, the liquid comes to a sudden stop. If the pipe suddenly starts banging and thrashing about you can be sure a water hammer was created.

To stop anything already moving requires a force pushing against it to take away its momentum or energy of motion. A valve shut quickly in a pipe full of moving liquid stops the liquid dead. The valve halts the momentum by force and an opposite, reaction force is created in the liquid as it hits the valve and compress against it. During the split second it takes to squeeze the water against the valve a huge pressure surge develops. It is the pressure surge from the change in momentum that creates the water hammer that rattles pipes.

The pressure surges travel at the speed of sound for that liquid and reachs hundreds of kilometers per hour. The more dense a liquid, (higher specific gravity) the faster the pressure surge. More dense liquids are heavier and have bigger momentum for the same velocity. This means denser liquids produce higher pressures when a valve is shut fast.

Any valve, which is closed faster than the time taken for the pressure surge to travel from the valve back to the inlet and return to the valve again, will produce a water hammer. Calculations can be done to determine the closing rate of a valve to be sure it is slow enough not to produce a hammer. The time depends on the liquid and pipe physical properties and the length of pipe.

There are three ways to manage water hammer. The first and best is to not create it in the first place. Since the hammer results from a sudden change in momentum it becomes necessary to slow the liquid gradually until it is stopped. This requires a slow valve closure. ‘Slow closure’ means the time it takes the valve to stroke, from open to closed, is longer than the time it takes the pressure wave to travel back and forth to the valve. Regulating valves can be installed in the air vent line of air actuated control valves to slow the speed of closing.

The second technique is to install a surge tank in the pipeline just upstream of the valve. Any water hammer in the pipe blows into the surge tank and the pressure is vented safely into the tank void.

Another technique is to install pressure arrestors in the pipeline. These are gas-pressurised chambers where a piston is pushed against the gas by the water hammer. The piston compresses the gas and absorbs the pressure surge.