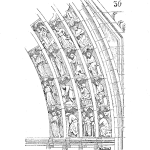 In the last Article, we explored the use of contour plots and other tools (such as a response optimizer) to help us quickly find solutions to our models.  In this article, we will look at the uncertainty in these predictions.  We will also discuss model validation to ensure that technical assumptions that are inherent in the modeling process is satisfied.

We again start by revisiting the battery life DOE example that was discussed in the previous article.  Recall that previously we used the optimizer to find a solution for the wall thickness that would produce a target battery life of 45.  As a reminder, we constrained the solution to use a Lithium battery since this made the response (battery life) insensitive to changes in ambient temperature.  In the table below, we see that the wall thickness (uncoded) should be set at 1.44 (mm).

An important question with any model is how well does it predict?  Suppose we actually produced a bunch of Lithium batteries with the wall thickness = 1.44.  Would we always expect to get a battery life of exactly 45?  The answer is NO!.  Our model was not perfect (not all variation is explained) and even if it was, the model effects and parameters will based on average responses.  The solution we found predicts that the average battery life will be 45.0 if we set wall thickness at 1.44.

In the next article, we will look a bit more at the uncertainty in these predictions.  We will also, talk about model validation to ensure that technical assumptions that are inherent in this process are satisfied.

It is important to recognize the degree of uncertainty when using predictive models for making predictions, helping to set specifications, etc.

Next, let’s look at Model Validation.  The basic reason for validating the model are summarized below.  To perform the validation, we calculate the residuals associated with each treatment.

Model validation is performed to:

The residuals (errors) are calculated by any DOE software program, but they are not difficult to compute.  We’ll look at a simple example.

The experiment above is an experiment with 3 factors (2 levels).  The right-most column contains the observed response and the model that was developed is shown at the bottom.  (X3 and X1X3 were significant).  For each row, we can plug in the actual coded values for X1 and X3 and compute the result, using the model.  For the first row, both X1 and X3 are “low” (-1).  So, we have:

Once we compute all the residuals, we can determine how large they are and also graph them on various plots to determine if there are any significant violations of the model assumptions.  The list below summarizes how residuals should behave if our modeling assumptions are satisfied.

The upper left plot shows a normal probability plot which is used to check if residuals are reasonably described by a normal distribution.  Since the points are close to linear on this plot, the normality assumption is satisfied.  The upper right shows residuals vs. the model predicted values (fitted value).  We are just looking for random values around zero and this one looks fine.

Below is a plot of residuals vs. the factor levels for a given factor.  Just like across response levels, we shouldn’t see a pattern across factor levels.

Finally, we should look at the residuals vs. the run order of the experiment.  Non-random patterns may be indicative of a change occurring during the conduct of the experiment (assuming that the experiment was randomized).  For example, in the plot below the first half of the runs look very different than the second half with regard to the predictive ability.

Violations of these rules may indicate non-linear responses, missing important factors, or other issues.  Non-constant variances across the range or lack of normality can often be corrected by transforming the response values before developing the predictive model.