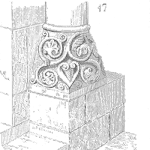 Fault Tree Analysis (FTA) is a technique to explore the many potential or actual causes of product or system failure.

Best applied when there are many possible ways something may fail. For example, when my car doesn’t start, it could be a dead battery, faulty started, loose wire, no fuel, and on and on.

FTA is a top-down analysis method, where we start with a symptom, the car will not start for example, and then list the may possible causes in a structured manner. The tree aspect of the name comes from the various branches that the may lead to the symptom. 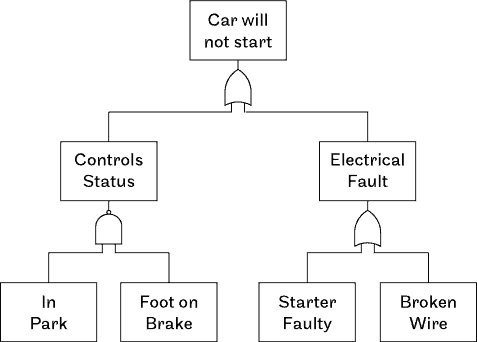 From the top block, Car will not start, (which is the experience I had when trying to start my car), this diagram lists two possible ways this failure may occur. If the controls are not in proper position, meaning both the car has to be in park and my foot depressing the brake. If either of these are not set correctly the control status will indicate the car is not ready to start.

The electrical faults is another path, as could be the fuel system, or other systems and parts in the ignition sequence.

Here the FTA lists only two possible causes, either of which may prevent the car from starting.

Why Use an FTA?

Of course, the FTA can become rather complex.

The idea is to build the FTA to help organize a complex set of paths to failure. Generally, if there are a few too many possible causes or combination of causes that lead to the top level symptom, then an FTA helps to organize and visualize the ways a system can fail.

An FTA may include probabilities and using a little math helps the team find the most and least likely paths to failure.

In this way, the FTA helps prioritize work to improve the system reliability.

When to Use an FTA?

An FTA has many uses.

It can help the design team during the concept or development phases craft a system design that minimizes potential failures. Used in combination with an FEMA helps the team think through and mitigate potential problems that lead to system failure.

An FTA is also helpful when analyzing failures.

When a failure occurs during a simulation, prototype testing, or in the hands of the person using the product, an FTA provides a means to evaluate and quickly identify the most likely root causes of the failure. This is particularly handy for the support teams when working with customers that have experienced a failure.

A third use of an FTA is if the probability of each element of the potential causes are updated using actual field data, then the team can use the FTA to evaluate which elements to improve that will have the greatest reliability improvement.

This can be a focus on ongoing product improvement or the design of the next generation of products.

FTA helps plan, manage, and improve a product and is best used with complex systems that have many possible failure mechanisms. It’s a tool to add to your reliability plan.