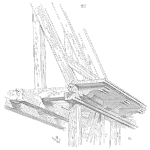 Capacitance level probes consist of a long rod or cable that protrude into a vessel and its contents. The instrument sets up an electric field between the probe and the tank wall using the contents of the tank as a dielectric (a nonconductor that allows an electric field to exist within itself). If the tank is non-metal, such as plastic or brick lined, two parallel rods are mounted in the level probe or a metal strip can be run on the outside of the tank. The electric field is set-up between the two probes or the probe and the metal strip. Figure 1 shows a simplified layout for a capacitance level probe.

In a metal tank, the probe and tank walls each become two oppositely charged sides of a capacitor. A capacitor stores an electric charge within itself. As the level of the tank contents change so does the electric charge between the probe and the wall. This changing charge is detected by the probe’s electronics. A signal proportional to the charge, and hence the height of the contents, is sent to the control system or to a read-out for observation.

Successful use of capacitance probes is dependent on the electrical properties of the liquid or solid being measured. (They are not suited to gases) The medium in which the probe sits must not conduct electricity through itself else a short circuit occurs between the probe and wall and prevents the electric field developing.

These instruments are not affected by changes in the content’s pressure, temperature or specific gravity (density). They can detect the presence of separate layers of different liquids within the same tank. These are robust devices that in suitable applications produce reliable readings and require no maintenance.

False level readings can arise if the dielectric properties change along the length of the probe and care is needed when calibrating the device in tanks containing layered liquids. Large changes in the vapour content within the space above the contents can lead to false level readings. When used to measure the level of solids there must be sufficient moisture content within the solid. In corrosive liquids the probes are protected from attack by plastic sheaths.