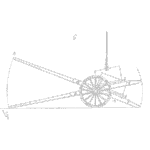 (Why threads strip and bolts break)

The bolt shank acts like a spring being pulled apart and it tries to return to its unloaded condition.

The amount of tension developed in the shank is dependent on the number of turns of the nut.

The size of the torque required to turn the nut has little to do with the tension applied to the bolt shank.

Rather the amount of torque needed to turn the nut reflects the slipperiness of the threads.

The nut torque stated in bolt tension tables is based on lubricating threads with light oil.

When another lubricant is used the torque values must be adjusted to get the 65% to 75% yield stress recommended for bolted connections.

The ease with which a nut moves on a bolt thread affects the torque required for it to turn. As the nut tightens down, its threads are squashed against the threads of the bolt shank.

The two threads wedge together against each other.

The bearing surface area under the nut and bolt head is larger than the cross-section of the bolt shank.

In the case of metal flanges being clamped together with the nut bears against the flange, the bolt shank begins to lengthen, and the threads in the nut and bolt start to distort.

The threads distort and become loaded one at a time.

If the nut continues to be tightened the shank lengthens further and the stress rises.

If the stress reaches a sufficient amount known as the yield stress, the atomic ‘spring’ structure deforms permanently. And if the nut is turned further the bolt eventually shears at the area of greatest stress.

If instead, the threads were the weaker part of the bolt assembly, it would be they that distorted to the point of failure and strip.

Bolts are tensioned normally by turning the nut until the effort to turn the nut reaches a certain force.

An alternate method is to heat the bolt to a specific temperature that expands it a given length and then put the bolt into the hole with the nut done up firmly snug and then let the bolt cool down.

The torque-up method is cheap and quick but poor in accuracy.

The bolt lengthening method is very accurate but time-consuming and costly.

The torque-up method relies on friction between nut and bolt threads to produce the reaction to the tightening torque.

If the friction is low the threads will undergo more loading before the friction force matches the tightening force.

If the threads are rough the friction force is greater and sooner matches the tightening force.

A good practice is to never do up threads dry but to always lightly lubricate them.

The lubricant reduces the effects of the thread surface roughness and lowers the friction between the nut and bolt. It provides a near consistent friction value on all the bolts and improves the accuracy of getting the same bolt load in all the bolts.

It also improves the accuracy of reaching the same bolt load for those bolts used repeatedly.

Rub your hands together and feel the friction they generate.

Now put some liquid detergent and water on them and rub the detergent into your hands.

When you rub them together with the detergent as lubricant there is much less friction and they slide over each other easily.

In other words, the detergent reduces the force required to rub your hands.

The same occurs when a lubricant is put on bolt threads. Less torque is needed to do up the nut.

The more slippery the lubricant, the less torque needed

The table below shows the maximum and minimum coefficients of friction for a range of thread surfaces with lubricants.

As the coefficients of friction drops, less torque is needed to tighten the nut.

With very low friction on small diameter bolts the nut can be turned so easily that the bolt will stretch past its yield before the right nut torque is reached, and the bolt breaks.

If using Teflon coated threads the recommended nut torque based on oil lubricated threads no longer applies and the torque value must be lowered to prevent the bolt being over- loaded.

Check with the bolt supplier as to the correction factor or do your own bolt stress versus lengthening trials under specific torque loads.

The total nut turning torque depends on both the thread slipperiness and the slipperiness of the bearing face under the turning fastener component.

The surface area of the nut contacting the flange produces additional friction.

In this case, the required torque for the bolt turning will not be the same as that for turning the nut.