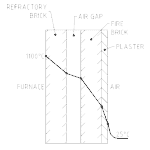 Heat is energy and its nature is to flow from a state of high excitement to one of low excitement. Heat is transferred from a hot place to a cold place by convection, conduction or radiation. This article explains the three modes of heat transfer and provides simple examples of each. Methods to reduce and increase heat transfer are also presented.

Overview of the Heat Transfer Modes

Radiation is the transfer of heat energy by the movement of electro-magnetic radiation through open space. All matter in the universe radiates energy unless its temperature is at absolute zero (-273 °C). Emitted radiation will be absorbed into, reflected from or transmitted through a body in the path of the radiation.

Conduction is the transfer of heat from one part of a substance to another, or to second substance in contact with it. Heat energy moves through a body by exciting neighbouring atoms. A temperature gradient (slope) is created from the hotter to the cooler sections.

Convection is the transfer of heat within a fluid (liquid or gas) by the mixing of one portion of fluid with another. The mixing can be by changes in density (e.g. hot air rising over an open fire) and is called natural convection or by mechanical means (e.g. a room fan heater) and is then known as forced convection.

Should it be possible for a surface to totally absorb all the energy that hits it without reflection or transmission it would be called a ‘black body’. A ‘black body’ is a surface that takes in all energy and emits nothing. Snow is nearly a ‘black body’ to heat radiation. Snow absorbs 98.5% of the heat that falls on it. Outer space is a ‘black body’ to the sun and absorbs all the sun’s energy.

Surface finish affects how much the surface behaves like a ‘black body’ (the emissivity). Rough surfaces are better absorbers and emitters of heat than smooth surfaces. A polished surface is a good reflector and a poor absorber so its emissivity is low.

Where ‘ε’ is the body’s emissivity and ‘T’ is the temperature in Kelvin (Kelvin = Centigrade + 273). The higher its temperature the more the energy is emitted.

The equation also tells us that surfaces with low emissivity emit less energy and so make good energy reflectors. Aluminium has low emissivity and it is why polished aluminium foil is often used to shield surfaces that are at temperatures different to their surroundings.

The amount of total heat transferred through a substance (conduction) depends on:

The equation for conduction of heat through a flat surface is shown below:

Heat Transfer from a Solid to a Fluid

A hot surface will transfer heat to a fluid (liquid or gas). In order to boil water for a cup of tea or coffee, the energy from a kettle’s heating element must be transferred to the water. The water nearest the element touches the surface and gets hot by contact (conduction). Natural convection causes the hot water to rise and new, cooler water touches the element and gets heated.

The heat transfer from a solid of surface area ‘A’ at a particular temperature, to a fluid at a different temperature touching it, is given by the equation below:

The equation tells us that convection heat transfer can be increased by having more surface area in contact with the fluid, or by increasing the heat transfer coefficient or by having a higher temperature difference between the surface and the fluid.

Convection can also be by mechanical means (known as forced convection) such as pumping through heat exchangers, using static mixers inside tubes to make the flow turbulent and putting agitators in steam jacketed tanks. Forced convection is used because the fluid is forced into contact with the hot surface many times during its passage around the heat transfer equipment. This increases the heat input and warms the fluid faster.

Where heat loss is to be reduced it becomes necessary to:

Radiated heat whose escape is to be minimised (like the flame in a boiler) is usually ‘boxed-in’ with thick walls made of low conducting materials like refractory bricks. These are then insulated on the outer side with low conducting, low emissive materials like fiberglass blankets. This sandwich construction offers high resistance to heat transfers (i.e. low conductivity). For example, the flame temperatures in a boiler maybe 1000 °C (588 °F) but the outside wall can be touched by hand.

An example of the use of multiple materials to create a thermal resistance is shown in Figure No. 1. It is a cross- section through a furnace wall showing the temperature of the various surfaces that make-up the wall (the temperature gradient). Note that the air gap stops conduction as the main heat transfer mode and makes radiation the dominant mode. If fiberglass batts could be used to fill the air gap, or aluminium metal sheeting hung between the walls, radiation would have greatly reduced and the outside wall temperature would be even lower.

In situations where maximum transfer of heat is required it becomes necessary to find ways to:
make the fluid contact the hot surfaces as much as possible by using turbulence,

Out in the open air, the pot gets only a small amount of the fire’s heat. Most is radiated in all directions. Some radiation hits the pot and some convective heat from the hot rising air touch the pot. In the hearth the pot gets radiation off the hot surrounding bricks and the fire and also convection heat from the hot rising air. In the kettle the water gets heat from direct contact with the heating elements. All the heat in the kettle’s heating elements is injected into the water and little is lost to the surroundings.

When trying to heat-up a substance it is necessary to insure that the maximum heat possible is put into it and not lost to the surroundings.

« Communication Failure: What to do?
Finding Skilled Workers »