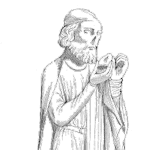 Estimating the set of stress and stress curves is an interesting exercise that may have a greater purpose: safety.

The connection is clear when considering the potential consequences of failure.

For example, the loss of braking power when landing an aircraft may result in the aircraft rolling off the end of the runway. This could be into a river or road and may have a rather poor outcome not only for the aircraft.

One way an aircraft breaking system could fail is the over-stress of a specific flange causing it to fracture.

I’m just making this up as I’m not all that familiar with aircraft brakes, yet have enjoyed their ability to actually stop a landing aircraft on occasion.

Given the two curves, we can calculate the probability of an applied load fracturing a flange. This is the chance the specific load is greater than the ability of the specific flange to hold without fracture.

Given any failure may result in catastrophe, what chance of failure is sufficiently low to be considered safe?

If the calculated value shows there is a 1 in 1,000 chance of failure, the strength is not sufficient and may require redesign or material change, or assembly improvement.

On the other hand, if the calculated chance of failure is 1 in a billion, then we may consider cost or weight savings.

No design or system is perfect and always has a chance of failure.

The cost and available technology to reduce the risk of failure limits our ability to shift the strength curve away from the stress curve (reduce chance of failure). Finding that balance is where the safety factor policy plays a role.

Your engineering team may have a policy aligned for different types of failures.

Like an FMEA severity scale, the policy may prioritize work to reduce risk of failures that lead to catastrophic outcomes. The policy may dictate a specific chance of failure, like 1 in a million chance. Or it may provide a ratio of how much stronger the strength as to be over the stress. Or be expressed as a margin of safety.

With any approach to stating the policy it translates to the separation distance of the stress and strength curves.

For example, we may set a policy that applies to the flange example as a safety factor of 5x. Meaning the strength of the flange should be at least 5 times as strong as the expected stress it will see during braking.

The same policy may include a 1.5x safety factor for non-critical failures. For example, the elements that support my inflight entertainment system is not life threatening, as if I can’t watch a movie during flight, that is an annoyance (assuming it only results in loss of function of the entertainment system and not a cabin fire, of course). Thus may warrant a lower margin of safety.

Do you have a policy that allows you and your team to evaluate your design against the various types of potential failure consequences?