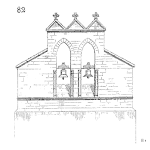 Here’s a case where they didn’t know how to keep the boss out of jail! In Jan 2019, a mine tailing dam (the structure used to contain waste from mining operations) collapsed. The video below shows the event. 259 people were confirmed dead and 11 declared missing. Cause – liquefaction – a commonly occurring phenomenon, and one that this particular mine had been warned about. Outcome – fatalities and associated human cost, suspended operations (for a brief period), company reputation, criminal charges (executives and engineering consultants). Risk management is an often neglected part of our job.

Here’s a link to a pretty good summary of what happened. Failures happen because of poor design, poor maintenance, poor operation, or (quite rarely) sabotage. Those are all under the control of informed and caring management. Knowing that is the first step in how to keep the boss out of jail.

In the case of tailing dams, maintenance and operation are pretty much the same things. Adding layers to the dam as tailing volumes grow (10 levels in this case) is a design feature. Inspections (a form of condition monitoring) were required by regulation and carried out. Warnings were issued and treated as little more than routine report content (i.e.: ignored). Interestingly the same company has a similar event just a few years before this one – they didn’t learn from mistakes. Arguably this disaster could have been avoided. Even if the collapse couldn’t be avoided (given the scale of the dam), steps could have been taken to minimize downstream consequences.

The owners, Vale, are setting aside $1.4 billion for damages. Legal proceedings will probably drag on for years. The company lost $19 billion in market cap in a day – the single largest loss in the history of the Brazilian stock market. This video (from France 24 – a news service) describes a number of other concerns:

In the case of mines, such dams are not usually looked after by maintenance departments. They actually get more engineering oversight and inspection – one would expect that to be enough. But it wasn’t. It’s a big physical asset that is looked after, largely in response to regulations. We all know that regulations tend to contain minimal requirements – obviously not enough. There is so much more that could have been done and they knew it. Failing to act on what you know, is not how you keep the boss out of jail. The CEO of Vale was charged with murder! The boss most definitely got into some trouble for this one. I wonder just how many others at various management levels were aware and failed to act responsibly, and why.

As maintainers, reliability engineers, and managers of our physical assets, we have some responsibility to ensure this (and less significant problems) arise and occur. We cannot expect our executive leadership to have deep subject matter expertise in our field. In fact few of us in the maintenance, reliability, and asset management “world” rise to executive levels. More often than not they come with production, marketing, legal, or financial backgrounds. We may not have the decision-making authority to act on what we know could happen, but we can most definitely make our concerns known.

For instance, no one is expected to work in unsafe conditions. In some jurisdictions, such as those with which I am most familiar, it is a right of workers to refuse unsafe work. If the tradespersons can do that, what’s to stop engineers, managers, and senior management from doing the same?

Recently, I published a book, Paying Your Way, that is aimed at senior-level managers and executives. One big worry is that at those levels people don’t tend to stay in their jobs for long and they are measured on the basis of short term results. At lower levels, it’s often a safe bet to make small incremental changes rather than bet your career on something big – even if the payback would be huge.

A friend and business colleague who works with senior levels in a mining company reviewed that book and offered several suggestions that were included. They dealt largely with reasons, cultural and other, why things go wrong.

In one remark he commented about project managers being measured on the success of a project (on time and on budget completion) not on long-term results. They are typically in other jobs by the time anyone finds out if the project actually delivered.

In another, he remarked about how disjointed our performance indicators can be – with departmental goals that tend to optimize performance in one dimension while reducing performance elsewhere – often in competition with other departments, rather than collaboratively attempting to improve overall results. Those key indicators usually don’t consider the big picture, yet they are often used by and for managers at the departmental level.

Short-term cost-cutting goals (such as reducing headcount, lowering inventory levels) can actually cause long-term harm as happens, for example, when proactive maintenance is deferred because there are too few people to handle repairs. That situation only gets worse!

Accounting-driven initiatives often go sideways. Direct savings are the goal and they are easily measured in the short term. Longer-term indirect results are often difficult to measure and even forecast accurately, so they are often ignored. Accountants don’t seem to get it, they only look at costs in the rearview mirror. It takes a person with a financial background to truly understand the value of maintenance as an investment. Sadly, that financial mindset is often missing at operational levels where many decisions are made, and that is probably why so many maintenance improvement initiatives are so difficult to keep going. Savings might show up in maintenance budgets (if all goes well for long enough), but the big benefit shows in production and revenues – not in someone’s budget. No one actually manages those, so managers look the other way.

Many organizations are now being over-managed and under-led. That shouldn’t be surprising – business schools offer degrees in management and administration, but not leadership.

In our more technically oriented world of reliability, maintenance, and asset management, we tend to see these problems and know the causes. We often do a poor job of articulating our concerns and getting the point across to those who do not speak our language. We often need help to do that, then to create a business case for change, then to implement the change. We are very busy with the day-to-day and often with a lack of resources. However, we do have a responsibility to keep our operations safe and protect our companies as well as our bosses from disasters like that described above. That requires us to get out of that day-to-day minutia, see the bigger picture of what is going on, and open our mouths!

Why not book an initial consultation to discuss your challenges and concerns? Click here.