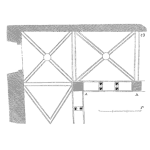 Eric Lof was born and educated in Sweden, moved to the United States in 1902, and worked for the Western Electric and General Electric Companies. Eric Lof published a series of articles on hydroelectric plants in 1913 in the Engineering Magazine. The Engineering Magazine helped spread the concepts of planning, efficiency, and scientific management. The magazine, for example, published the first Gantt charts in 1910.

Lof published his articles in a book in 1917, co-authored with David Rushmore, who was the Chief Engineer of General Electric’s Power and Mining Department. The book added a new chapter on organization and operation. This chapter described maintenance practices that are effectively a Total Productive Maintenance (TPM) system.

A single paragraph summarizes what we would normally consider a best-practice maintenance plan with elements of Total Productive Maintenance:

“In regard to the maintenance of the station, the operating attendants do a large amount of this work and practically all of the inspection. Instructions for cleaning and inspection have been very carefully drawn up, and the operating men instructed in the proper care of the apparatus. Every piece of apparatus in the station has been considered individually and it has been determined just how often it needs to be inspected and how thorough an inspection is needed. All the equipment is tabulated on charts, which show the periodicity of the inspections and provide spaces which are to be filled in with the date and initials of the attendant who made the inspection. These charts are posted on the wall in a conspicuous place and make an excellent graphical record of the status of the inspections of the entire station up to date. Any delayed inspections are, naturally, inquired into.” (pg. 754)

On page 756, they noted the advantages of exposed tool boards: “…being permitted to repair their own apparatus the operating attendants become more familiar with its details and learn better how to operate it and take operating care of it, and are given an interesting occupation, in addition to saving the time of the maintenance men in attending to minor repairs.”

They state that “this system of keeping track of inspections has been the result of much experimenting and investigation of the methods of other companies.” These methods weren’t academic theories, but observed best practices from industry experts.

They then end the book by summarizing a complete maintenance philosophy,

“The aim is to substitute preventive maintenance for breaking down repairs. The result of this inspection and maintenance system has been that the apparatus is kept in better condition, and this has been accomplished with the minimum of attention on the part of superiors, as the system is more or less automatic in its workings. At the same time, the reports and schedules give the superior very definite knowledge of the condition of his equipment. All this work being laid out before the man in the form of instructions relieves the superior of continually correcting new men and instructing them in how things are supposed to be done. It also eliminates dependence on word-of-mouth transmission of instructions from one man to another.”

“This systemization tends to minimize the possibility of neglect of maintenance work on apparatus, and by scheduling the work as to time and making necessary the planning of the work to get it through in that period, there is less time lost in doing the maintenance jobs or between jobs, and the maintenance or operating shifts are thus able to turn out more work and better work.”

Lof’s co-author Rushmore was active in the AIEE, which is now the IEEE. His contributions to engineering were noted in The Making of a Profession: A Century of Electrical Engineering in America by A. Michal McMahon. Rushmore was also a member of American Society of Mechanical Engineers, American Society of Civil Engineers, and American Institute of Mining Engineers. Eric Lof’s author biography in The Engineering Magazine is listed next to Harrington Emerson, an influential efficiency and management expert.  Lof & Rushmore’s management concepts were available to a wide audience of engineers and managers.

McMahon, A. Michal. The Making of a Profession: A Century of Electrical Engineering in America  New York: The Institute of Electrical and Electronics Engineers, 1984. Engineering and Technology History Wiki:  https://ethw.org/w/images/e/ee/The_Making_of_a_Profession.pdf