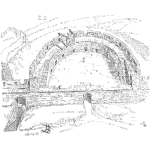 Control charts provide an ongoing statistical test to determine if the recent set of readings represents convincing evidence that a process has changed or not from an established stable average.

The test also checks the sample to sample variation to determine if the variation is within the established stable range. A stable process is predictable and a control chart provides the evidence that a process is stable or not.

Some control charts use a sample of items for each measurement. The sample average values tend to be normally distributed allowing straightforward construction and interpretation of the control charts. The center line of a chart is the process average. The control limits are generally set at plus or minus three standard deviations (of the sample means – commonly called the sampling error of the mean) from the grand average.

When selecting a sub-group size, the intent is to collect samples that are as homogeneous as possible. The intent is to detect shifts between samples as the variation within a sample is relatively small.

One method is to select samples from the process as close together as possible. Another option is to randomly select from across a period of time or batch. The later option may have larger within sample variation, and not as sensitive to shifts in the mean as the first option.

A common sub-group size is 5 items. It is beyond the scope of this note to discuss determining the optimum subgroup size for your particular situation.

The X-bar and R chart or Shewhart charts are the most common of the many types of control charts. These use a sub-group of items for each sample and plot on two charts the mean of the sample and the range of the sample.

Here is a chart example:

The plotted points, X-bars, are the average of the sample with n readings,

n is the sub-group size

UCL and LCL are the upper and lower (respectively) control limits.

The sample readings are taken, averaged and plotted with a dot. The connecting lines are optional and may provide a easier way to interpret the data.

Here is an R chart example:

R is the range of the sample

The center line, labeled R-bar, ss the average of the sample ranges.

The y-axis should include a span of values suitable to include the or R values and provide a convenient way to plot and read the charts.

These two charts and others like them provide a graphical statistical test for process stability. Used correctly they provide the necessary feedback to allow for process improvement.

Chance of Catching a Shift in a Control Chart (article)