The gage measurements are expected to be stable, meaning the gage should provide consistent readings. Some random variation due to random error is expected. However, gage measurements change with time or because the gage is damaged. The gage stability can be checked by measuring a known reference.

In this article, it is shown how to use control charts to assess gage stability.

The stability can be viewed as a combination of the bias and repeatability demonstrated with repeat measurements of a known characteristic on a reference part.

Repeated measurements always show variation and may be attributed to common causes.  But special causes may be present that inflate the variation. Some examples of special causes are:

Gages must be checked periodically to determine if they are still acceptable. The gage records should be retained for analysis and compared to the current gage bias and repeatability.

The MSA manual provides guidelines for conducting a stability study as follows:

Run rules provide a way to look for non-random patterns in control charts that are produced by special causes of variation. If the control chart shows special causes are present, then more advanced multivariate studies may be required to identify the special causes. For example, a GR&Rstudy, which is based on DOE concepts, can quantify the variation due to appraiser, part, and repeatability.

Control Charts of the Measurements

For this example, the MSA Reference Manual 4thedition, chapter III, section B, recommendations for a stability study were followed. There were 20 groups of 5 repeated measurements of the same part dimension. Minitab was used to display the measurements on a combined -bar and R-chart. 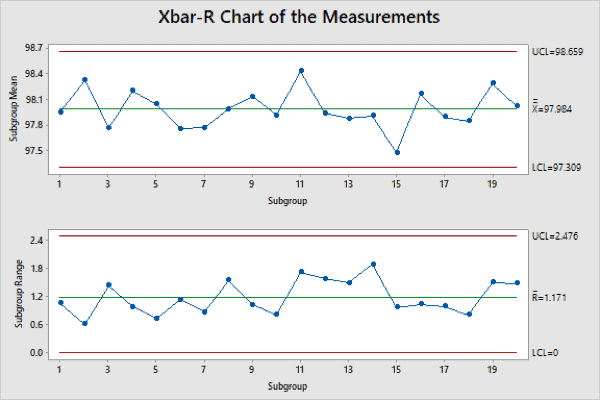 In this example, the Minitab software checked all the run rules, and the measurements showed no evidence of special causes. The measurements appear to be stable, subject to only common causes.

It would be easier to analyze the gage bias with a control chart. If the original and new masters had close reference values, the gage bias should be similar. A single X-bar chart could be used.

Control Chart of the Bias

The bias values for each measurement are calculated by subtracting the master part reference value from the measurement data. This topic was discussed in MSA 3 Gage Bias

The bias control charts using the data for figure 1 yielded, 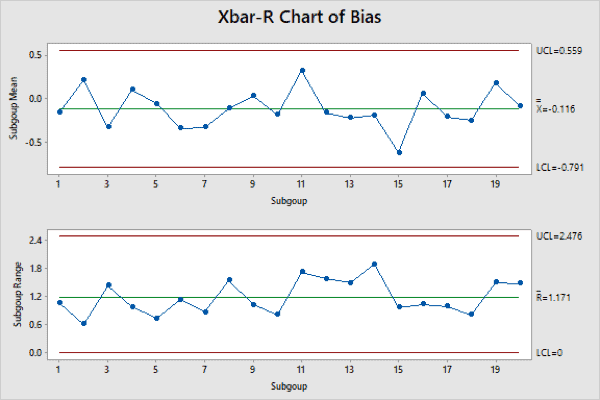 The X-bar chart of figure 2 is almost identical to that in figure 1, except for y-axis scale. Again, the run rules were all considered, and the bias control chart shows no evidence of special causes. The gage is stable.

« Dual-Ring Network Reliability
The key to Reliable Equipment is the same as the secret to a happy marriage! »