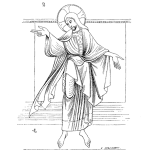 The purpose of control charts is to detect significant process changes when they occur.  In general, charts that display averages of data/measurements (X-bar charts) are more useful than charts of individual data points or measurements.  Charts of individuals are not nearly as sensitive as charts of averages at detecting process changes quickly.  X-bar charts are far superior at detecting process shifts in a timely manner, and the sample size is a crucial element in ensuring that appropriate chart signals are produced.

To understand the concept, it is useful to review the impact that averaging data has on variation.  The graphic below compares the distribution of individual values with the distributions of averages of various sample sizes.

On an x-bar control chart, this idea is reflected by control limits getting tighter as the sample size increases.

Now, consider a process that is stable and under statistical control.  This curve is represented by the blue curve on the graphic below.  Suppose we desire that if the process average shifts by a specified amount (such that it is represented by the red curve below), we would want to obtain a chart signal with very high probability.

In the top set of distributions, we are working with individuals.  The control limits for the blue process are represented by the dashed vertical lines.  Following the process shift, we will sample from the red curve.  Note that most of the red curve still falls inside the control limits for the blue curve.  This means that we are very unlikely to see a signal on our chart for the shift indicated.

Now consider, the second set of distributions.  They represent the case where we are using an x-bar chart with sample size = 2.  A shift of the same size is shown.  Here, the process curves are tighter since they represent averages (with n = 2).  While things are better than the first case, there is still a significant overlap between these distributions and it is still not very likely that we will detect the shift quickly.

The case with n = 5 (the third case) is better yet, but still not good enough.  We want to be able to detect the shift with high probability.

Finally, with n = 12 (the last case), we see that for the same size shift, the two distributions are practically separate.  In other words, if the shift occurs, our next sample average will come from the red curve and it will almost certainly be outside of the control limits (based on the blue curve).

Although the above graphics allow us to understand how sample size affects chart sensitivity (the ability to detect desired process changes), a formula is typically used to compute the necessary sample size for a given application.  The sample size is a function of the desired sensitivity, the process standard deviation, and the willingness to tolerate type II errors (where the process shifts but the chart fails to detect the shift).

The formula and its application will be discussed in the next article.