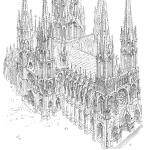 An error that I see on occasion is the use of statistical confidence with a goal or target value. For example, we want 95% reliability at five years with 90% confidence. What does that mean?

Statistical confidence is and only should be used with statements about a sample and the calculated statistic.

Statistic A numerical data value taken from a sample that may be used ot make an inference about a population.

Parameter The true population value, often unknown, estimated by a statistic. A parameter is a numerical value describing some characteristic of a population or process.

Sample A portion or subset of a population.

Random Sample A subset of a population selected where every item in the population has an equal chance to be selected into the sample.

Let’s say we have a population, and we are interested in the mean (average) of that population. We select a sample (at random if at all possible) and measure a value, like height or weight or resistance, or whatever is of interest, for each selected item in the sample.

We calculate the mean of the sample by summing the sample values and dividing by the number of items in the sample.

Now an example. Given the average (mean statistic) of 100 samples is 18 with a population standard deviation (parameter) of 6. Calculate the 95% confidence interval for the population mean, μ.

For fun, consider we are willing to take more risk of the sample not representing the population. The same sample just changes the confidence. Let’s go from 95% to 90% and we find
$$ \large\displaystyle \mu =18\pm 1.645\frac{6}{\sqrt{100}}=0.987$$
Which has a smaller range. Interesting. Same data, more risk, smaller confidence range. In other words, by accepting more risk, we are saying there is now a greater chance that the true unknown parameter falls outside the range described by the confidence interval. The true value doesn’t change; the sample statistic doesn’t change.