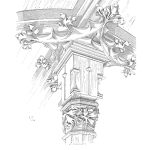 Abstract. In our last series highlighting the 4 primary Failure Modes (FM) of component failures (erosion, corrosion, fatigue and overload), we discussed how to read fractured surfaces. In this follow up series, we will take a look at tips on how to collect, preserve and examine such failed components.

I will reiterate my intent to make this series, as with the others, as basic and generic as possible. This will be old news, and metallurgy 101, to seasoned analysts. However, my outreach is to those on the front lines. You are the ones ones who will determine if the analysts get these failed parts or not, for a detailed root cause analysis. How the parts are preserved is extremely important to the investigators.

I will try to provide you enough education to make it challenging and fun, not only to properly preserve the failed parts, but to participate with your curiosity as to what influences, adversely impacted the failed parts?

Some of the basics in evidence preservation after a failure, include the following:

4. Take pictures up & down stream of failure. Initially, we may not know if there were upstream and/or downstream influences that contributed to the failure. Therefore we must preserve those scenes as well.

5. Take video of failure event area. Chances are you will be time-pressured by production to hurry up and get what you need and then get out, as they will want to get production rolling again. Fastest way to preserve the scene is with video!

6. Map out the event scene as needed. Once you have your pictures and videos, draw a map or sketch of the failure scene and note where the anomalies are the located. This will be a team job aide in the investigation.

7. Interview key people who were present as the event unfolded. It is extremely important to interview witnesses immediately. The longer you wait to interview, the more attention to detail you will lose (due to short-term memory loss). You will also lose direct observation information if the witness is influenced by talking to others involved (say in the break room), and their opinions are reshaped as a result.

8. Map out where each person was during the event. Just like we talked about mapping out physical anomalies at the failure scene, we should also note where key players were as the failure unfolded (as opposed to where they should have been).

9. Create a timeline. An accurate and detailed timeline of events leading up to the failure is always critical to the investigation.

10. Leave instructions with area leadership about what parts you want & where to stage them. You may not be able to get certain parts you need because they are still in operation. If this happens, you will need to get cooperation of area leadership to ensure you get the parts when they are available (perhaps a shutdown). This will require some planning about where you want them to stage the desired parts.

In the following clips, you will notice there is some redundancy in the guidance on each clip. This is because it is anticipated that if this article is printed off, each clip will stand independent of the others.

Since this article is focusing only on Shafts, we will provide basic guidance of how to preserve, document and examine the evidence in an unbiased manner.

Once the failed/damaged shafts are preserved we need to consider the following tasks to help us properly document our inspection into our evidence logs.

When inspecting a shaft it is important to take measurements to identify the specific location of anomalies and where on the rotation of the shaft they appear. Note any degradation to the diameter of the shaft, and where it is located. Compare this to the specifications. Any ‘gaps’ will have to be explained during the course of the RCA.

Looks for any signs of rust (or oxidation) and note its location. The RCA will have to explain how the shaft was exposed to moisture and oxygen, in order to permit rust to form.

In these pictures below we are noting the location of ‘peen marks’. It is important to note where the peen marks are located on the diameter of the shaft. If you are not familiar with ‘peening’ and its purpose, here is a basic explanation about “What is Peening?”

During peening, the surface layer attempts to expand laterally but is prevented from doing so by the elastic nature of the sub-surface, bulk material. This results in the development of beneficial, compressive residual stresses in the surface layer, which are balanced by tensile residual stresses elsewhere. The layer of compressed surface material produced by peening resists the development and propagation of cracks and increases resistance to fatigue failure, corrosion fatigue, stress corrosion and cavitation erosion.

The most common peening techniques are:

Shot peening – Involves bombardment of the metal surface by spherical shot. The shot consists of rounded particles of cast iron, cast steel or stainless steel in various mesh sizes. Both mechanized and manual systems are used, depending on the particular component and area to be treated.

Roto (flail) peening – The surfaces are impacted by two or more shot-coated flaps which extend radially from a spindle. Each flap consists of shot (cast steel or tungsten carbide) embedded into a wire mesh or fiber.

Needle peening – Uses a de-scaling gun but with needles having ‘radiussed’ ends. The cluster of metal needles is usually made from hardened tool steel.

Hammer peening – Similar to needle peening except that a single metal rod, rather than a cluster of needles, is used and applied in a similar way.

In this picture we note the location of the initial peen marks (they look like dimples on a golf ball).

On this picture we note there are also peen mark’s, 180 degrees opposite of the other noted peen marks. The RCA will have to explain this, but oftentimes this is evidence the shaft was put into a vice.

In the picture below we are noting the presence of any grooves that have formed, and their locations. We will again compare against the specs and determine the ‘gaps’. You will also notice horizontal ‘chatter’ marks. Both of these anomalies will have to be explained by the RCA. With regards to the ‘chatter’ marks, this is often a sign of the frequent replacement of bearings (slide marks going in and out).

On this last picture below, we observe fretting corrosion. If you will remember from our past article on general corrosion, fretting is often associated with improper fits. The location should be noted, compared to the specs and accounted for in the RCA.

This will end our basic tips on how to preserve, document and examine shafts to prep for an RCA. I will likely post similar articles in the future, but on different components. However, the handling of them will all mirror what I described in this article.

Just as an FYI, I am pulling all of this material from public workshops we offer, taught by practitioners and not just trainers! These workshops range from the very basic to those who really want to get into this fascinating field of metallurgical analysis and Root Cause Analysis (RCA), and become Lead Investigators.

As always, I appreciate all of the great feedback and the sharing from the veterans in the field…the front-lines who make things happen!! Thank you for your time and participation.

« Learning to Crawl, Before You Can Walk and Run
Failure Analysis – The Big Picture »