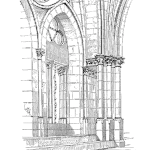 Tracking belts on bucket elevators and short belt conveyors. Flexible, flat belts are used on bucket elevators and belt conveyors to carry loose, bulk product. The belt is stretched tight from head drum to tail drum and the friction generated on the turning head drum is used to drive the belt and carry the product. The belt must run true on the end pulleys (drums) and stay within the sides of the equipment structure. If the belt runs off the drums, buckets will be destroyed and belt edges frayed. In the worst cases the belt runs off the pulleys resulting in a breakdown repair. Proper and long- lived tracking of belts is critical for trouble-free operation.

The head and tail drums on belt bucket elevators and short conveyors are usually steel cylinders. A shaft is mounted thorough them at the center and extending outward long enough to mount bearings on both sides. Often the shell is steel pressure pipe and the ends are cut from flat plate and welded in place. The shaft can be welded into the end plates, but for easy repair, it is best mounted in taper lock hubs that are welded to the end plates and the shaft clamped into them. The shell length is usually 25 – 40 mm (1” – 1-1/2”) longer than the belt width

Where additional friction is required the head pulley can be lagged in rubber or grooved with a 45o herring bone pattern.

On belt bucket elevators carrying powdered or dusty product the shell on the bottom pulley can be replaced with round bars spaced around the end plates so that the gap between them and the edge of the belt allows the product to fall out and the pulley self-cleans.

To insure the belt runs centrally the two pulleys must be in- line center to center. This is done with a string line stretched from the mid-point on both drums. The distance from a straight edge datum on the support structure is measured and the position of the shaft on the bearings adjusted until the string lines up with the datum straight edge.

The head and tail pulley axes are also initially aligned parallel to each other and in the same plane. Once the drum centers are inline, the centerline distance shaft to shaft on both sides is measured from a datum line on the support structure. Bring the drums as close together as possible so that the belt can be later stretched. Once the drums are aligned both horizontally and axially the belt is fitted on the pulleys.

Belts for short conveyors are usually purchased with the ends joined and are slipped into place over the pulleys. A splice at 45o to the belt running direction and not square is preferred. This allows the edge to lead into the scrapper and lessens the chance of the join catching and ripped.

The belt for belt bucket elevators can be supplied either with buckets already mounted or without. Once the buckets are mounted it must be fed into the structure from the top and the ends of the belt joined later through a hatch in the wall of the structure. There are three common methods to join the ends of bucket belts – overlap, butt and strap and turn-up clamp. Figure No. 1 shows the joining methods.

Insure joins are square to the running direction of the belt so that the belt runs as straight and true as possible.

Belt tracking is greatly improved when one of the drums is crowned. The drive pulley is the one usually crowned though the bottom drum can also be used. Only one of the drums is crowned and not both. Crowning allows the natural elasticity of the belt to act like a spring and pull the belt back down the rise of the crown if it starts to wander to one side. The height of the crown is 1.5% to 2% of the pulley length.

Once the belt is installed and pulled tight, the distance between drum shafts is measured on both sides and positioned the same distance apart. The belt is run unloaded and if it wanders the tail pulley is adjusted and made tighter on the side the belt moves toward. The basic rule is that the belt moves toward the slack side and away from the tight side (this is also why crowning one pulley works). Another way to look at it is that the belt goes from the high-energy side (tight) to the low-energy side (loose).

Once the unloaded belt is running true product is then introduced onto it. If the belt wanders under load the tail pulley is further adjusted as was done when set-up unloaded.

Only tension the belt enough to insure it does not slip under full load. Over-tensioning the belt rips the internal fibers and the belt stretches and creeps continuously.

All snub rollers, carrying rollers and return rollers must be square to the centerline of the belt and parallel to each other. Check this by measuring diagonals, which should be equal.

Some times the belt can take on a ‘banana’ shape or ‘crescent’ camber along its length. Usually this is a sign of uneven internal fibre lengths. In this case the belt wanders from side to side during a rotation and little can be done to control it except to get it running as near to center as possible. Depending on the severity of the ‘banana’ it may even require that one of the drums be offset from the center- to-center alignment so that the belt stays on the pulleys. If the camber exceeds 1% of the belt length replace it.

It can also be useful to install ‘digging’ buckets every tenth bucket. These buckets are slightly oversize in length and depth to the rest of the buckets and act as a scrapper to clear away any product build-up on the sides of the structure. Make them of metal or a harder material than the regular buckets.

« Benefits of Comparing Lean/Kaizen with Agile/Scrum
ISO 9001:2015 Certifications and the American Society for Quality »