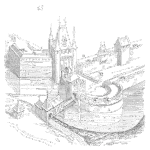 Each tyre is mounted to the rotating shell and revolves on two roller trunnions. The shell is rotated mechanically.

Generally, the tyres and trunnions are made of steel but in lightweight equipment with low rolling surface temperatures, the trunnions can be lined with hard wearing plastic. In those situations where the product is continuously fed through the equipment, the entire shell is inclined a few degrees.

With each rotation, the product is lifted and moved along a distance.

The rotating shell is aligned by correctly positioning of the tyres and trunnions. Guide rollers are fitted to the front and back of a tyre and trunnion set to limit axial movement.

If the alignment between the tyre and trunnions is lost due to wear, poor repair, installation error or impact, the equipment will need to be tracked

Installation and maintenance personnel will flounder when tracking the tyres without proper references to align the equipment.

Proper tracking of rotary equipment requires access to a datum from which the axial alignment of the tyres can be set. The datum is a series of points whose relative vertical and horizontal positions are accurately known.

Figure No. 1 show how the datum is used to set the vertical and horizontal position of the tyres. 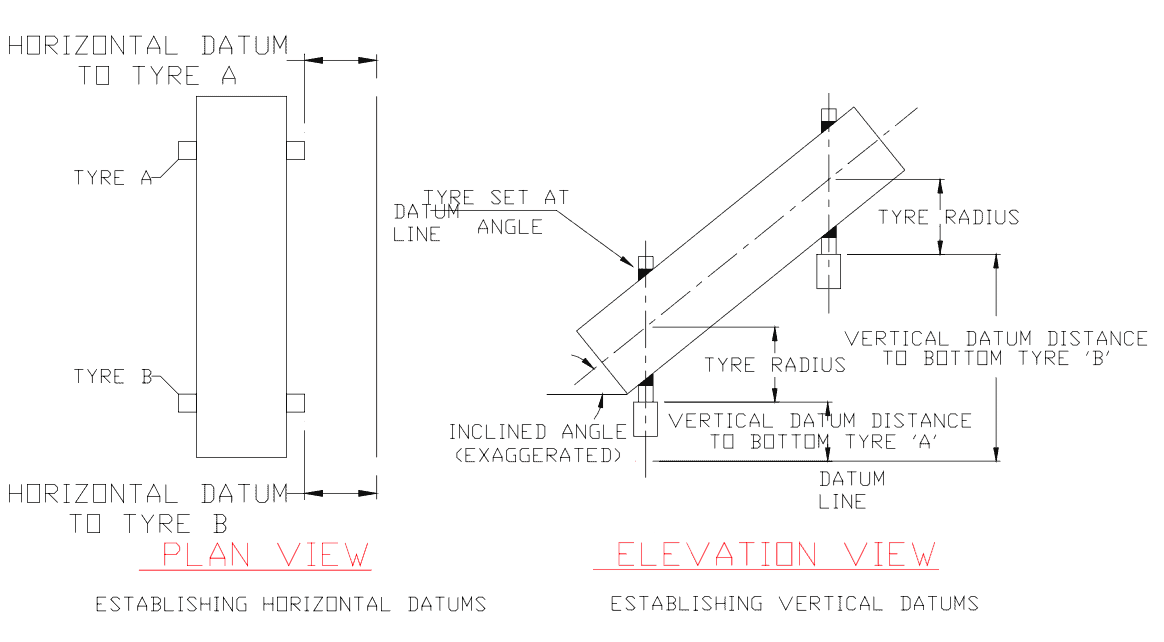 Figure No. 1 Vertical and horizontal datum.

Unless the equipment manufacturer or installer provided the datum’s, you need to be creative in establishing the necessary reference points.

One method that proved suitable on a rotary reactor was to use laser surveying to establish both the vertical heights of the trunnion pedestals under each tyre and to position a datum line offset from the tyre axis to provide horizontal reference points. This allowed accurate measurement of the horizontal and vertical position of each tyre axis to within 0.5 mm.

Drawing No. 2 shows how the hold down bolts were used as a horizontal reference on the assumption that the pedestals were cast identical and had been properly aligned when the equipment was originally installed.

The numbers in the circles represent the vertical datum and show that all but one end of one pedestal were at the same level. The “marks on the concrete floor” distance represent the offset from the hold down bolts to give the horizontal alignment.

Provided the drive alignment can be adjusted it is simpler to line up the tyres and trunnions to the datum and then align the drive to the shell.

A further consideration in tracking large rotating equipment is the alignment of the trunnions to the tyre. The tyre and trunnion must always be aligned with each other. Where the shell is inclined the trunnions must also be inclined to the same angle.

If the rollers are set skew to the tyre axis forces are created which drives the shell along its axis. This can advantageous and necessary if the shell requires ‘floating’ between the axial guide rollers, but otherwise, leads to unnecessary wear.

Misalignment between tyre and rollers can cause excessive wear of the rolling faces because the previous line contact between the two surfaces becomes a highly stressed point contact. Offsetting one trunnion pair from the other will cause twisting of the shell.

Drawing No. 3 highlights the problems caused by rolling face misalignment. 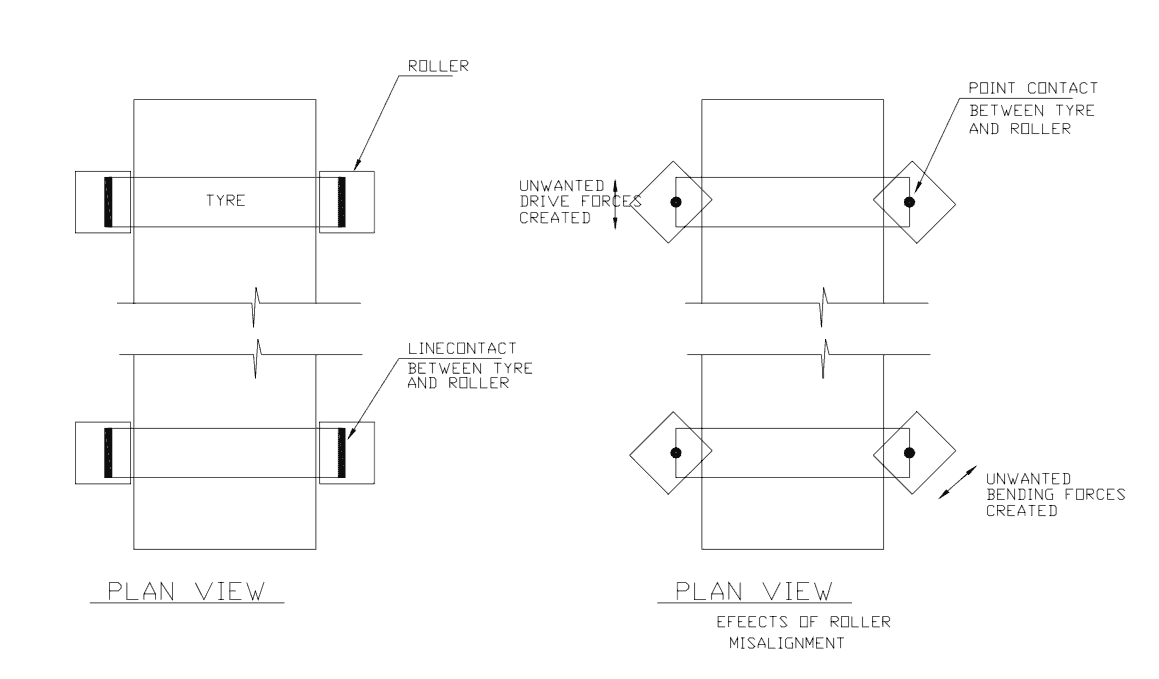 Drawing No. 3 Contact stress changes due to trunnion alignment.

Correct tracking of rotating dryers, kilns and reactors is achieved by first aligning the tyre and trunnion sets axis true to each other.

It is easier if all trunnions are the same diameter otherwise compensating calculations have to be made for each differently sized trunnion. The shell and tyres are lowered or raised by jacking the trunnions respectively out or in.

Axial trusting is then removed by giving the trunnions a minuscule amount of offset relative to the tyre axis.

Axial ‘float’ adjustments are done by jacking alternate sides of each trunnion pair in or out depending on which direction the float is required.

A ‘rough-in’ adjustment can be done while the shell is cold but the final setting must be done at operating temperature while under load.

To select the trunnion bearing housing to be jacked stand behind the trunnion concerned, with the fingers of both hands pointing in the opposite direction to the rotation of the shell.

The hand with the thumb pointing in the direction the shell has to be steered is the same hand as the bearing housing that needs to be jacked minutely inward to the shell. 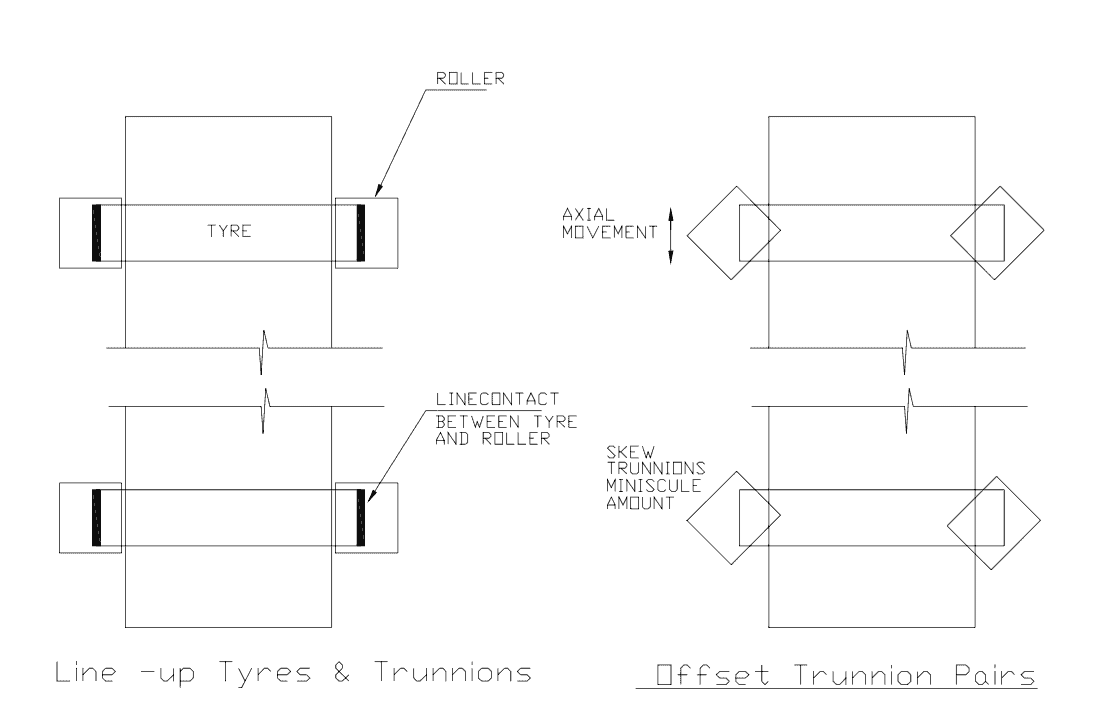 Drawing No. 4 Offsetting trunnions to float the kiln