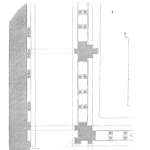 There are only two ways to get high system reliability if you want a highly reliable system. Equipment in an operation can be configured in series or in parallel. In series, one item connects sequentially to the other. In parallel, each item is arranged as a companion, where one duplicates the other.

It takes just one item to fail in a series arrangement and the whole system is failed. Each individual item must be exceptional reliable when equipment is configured in series to get a highly reliable system. That is not the case when equipment is arranged in a parallel redundancy.

A system is formed when equipment is combined to do a duty. When the pump, coupling, and electric motor in the image above are connected they form a series system used to move liquid through pipes from one point to another. The reliability of the whole system depends on the reliability of each item. When one item fails—be it the pump, or coupling, or motor—the whole system stops and no liquid flows.

The other way to combine equipment is as a parallel system arrangement. In the lower image on the slide you see two filter stations in parallel.

They can be configured to work in one of two ways. One is the duty circuit taking the full service, and the other is the standby doing no work, but ready to come online when the duty goes offline—this is known as a duty and standby configuration, or a standby redundancy.

The other arrangement is where both circuits operate together and share the service load, and if one circuit goes offline the remaining circuit can handle the full duty. This operating philosophy is called a fully active arrangement. The lower table shows when two systems of 0.6 reliability are paralleled in a fully active arrangement the system reliability is 0.84. When six separate systems of 0.6 reliability are paralleled, the system reliability is 0.996. By putting equipment in parallel you create a more reliable system because when one item fails the other item continues delivering the duty.

Getting a Highly Reliable System

When you use equipment there are only two ways to get high system reliability. If it’s a series system, then every piece of equipment in the arrangement must exceptionally reliable. The other way is to duplicate the system and have a complete second system in parallel ready to replace the first system when it fails.