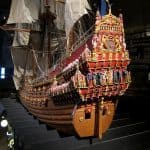 The Vasa is a Swedish ship that was constructed between 1626 and 1628.  It is a great story of an engineering disaster,  well that’s how it is labeled. It doesn’t take too much investigation to see it is really a leadership disaster.

I saw the Vasa in beautifully restored condition at it’s museum in Stockholm Sweden.  It was retrieved from the ocean floor in 1961.   Amazingly after almost 300 years it was intact and well preserved in the freezing waters off Sweden.  This is it’s story… and warning! 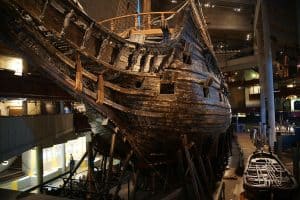 The ship was commissioned by the King of Sweden, Gustavus Adolphus.  It was a mix of modern military capability and a showpiece to glorify Sweden’s status. It was adorned with all kinds of jewels and precious metals. This includes what I would consider excessive items, like gold lions heads on the inside of every cannon door which were added to “taunt and intimidate” the enemy.  Seems a bit like putting gold tassels on a Patriot missile or being trained to do jazz hands in hand to hand combat.  (Note: I’ve never observed a patriot missile launch or hand to hand combat training so really can’t comment on what may or may not be done.) 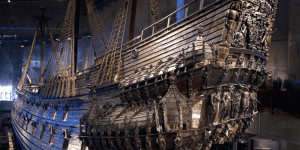 The Swedes are some of the best marine architects in the world.  They had a long track record, the descendants of the Vikings. I was able to visit the museum because I was in Scandinavia doing engineering work for the shipbuilding industry at the time. It’s still the “place to be” for top-notch naval architecture and technology. What went wrong with the Vasa then?  The project leader, was the king.  He unfortunately put ego ahead of the realistic project and engineering constraints.  The result was an amazing, beautiful, and very powerful ship that sailed for a total of about 1300 meters.  Capsized just outside of the harbor due to light wind. The king wasn’t present for the launch.  I picture the letter sent informing him of “the launch” opening with something like this; “Your majesty, I have good news and bad news.  The good news is the gold lion heads came out great.”

The engineering team knew they were in trouble when the king requested design changes mid-project but would not listen to the responses that the suggested changes were ill-advised.  This continued throughout the project with the architects and constructors growing quieter and quieter as the futility of disagreement with the king became evident.  The most indicative moment of the decision to be blind to reality was the response to the final design qualification test carried out on all new ships, the final QC.

It was the policy that all completed ships had to pass a stability test before being deemed seaworthy.  The test entailed having a set number of men run back and forth on the deck, from starboard to port. There was a specific protocol for the number of men and number of times.  They were only able to rock it three or four times before it became evident the ship was going to capsize.  So the test was stopped with the conclusion that the ship was not seaworthy.  The king said it was a silly test and that it was likely to be just fine.  What did his technical team know anyway, they were just the result of 300+ years of handed down expertise in shipbuilding.  He knew better because he was in charge.

So the ship launched with the sails raised proudly in front of a large international crowd.  A gust of wind blew and the ship listed strongly to one side.  The sails were dropped and a second light gust of wind made the ship list again, far enough for the open cannon ports to take on water.  Fast forward about 60 seconds, 30 sailors are dead and the rest are freezing in the water, waiting to be rescued by the ships in the harbor there to celebrate the Vasa’s launch.  The king did a big and very public inquiry (read “witch hunt”) to find out who was at fault. In the end, the investigation was inconclusive.  But anyone close to the project knew what had occurred.

I’ve seen different degrees of this type of project leadership from time to time.  There is nothing wrong with a leader who has information from many sources choosing to not go with the counsel from one specific group.  A high-level view of the landscape may provide information that is not evident to others.   This could be that time to market is so critical that it is the smart business decision to release on-time and prepare for handling anticipated field issues while fixes are created in parallel.  But the extreme of not heading the unanimous advice of a team that is predicting disaster is not isolated to the history books.   I believe the engineering and technical teams of the Challenger Space Shuttle reported a similar experience, and I know many of you have too.