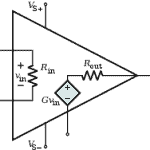 In the beginning– just test the specs.

Analog circuits have been around a long time. Consider a simple LRC circuit– the inputs and outputs are continuous wave forms.

This remains a key differentiator from digital circuits which operate on 1’s and 0’s.

Continuous waveforms require different test equipment and test techniques. Analog circuits have properties of impedance, 3Db points in the frequency domain, transform functions. They can be treated like a lumped circuit or a distributed circuit in which signal integrity and transmission line theory apply.

So testing is easy- you just test the specs.

The data sheet includes the test setup that verifies the design specs. If you closely look, the spec values indicate the test conditions. Checking the specifications requires test conditions which can differ from spec to spec and requires measurement equipment that generates and analyzes the waveforms. For a stand-alone analog product such a test solution can be cost effective. However, when incorporated in VLSI circuit– not so cost effective. Just testing to specs can become expensive.

Some of you may recall that music use to be on vinyl records or cassette tapes. This analog storage of music changed to compact discs (CDs) and today MP3 files. Something similar happened in VLSI devices. Increasingly digital circuits replaced analog circuits. The analog circuits remained at the edge of a die either converting a signal into a digital word or providing the input/output (I/O) circuits for communicating with other VLSI devices. The ratio of analog to digital circuits has heavily favored digital circuits. Yet our world remains analog. With the increase in devices for the Internet Of Things (IOT) the dominance of digital could be changing.

IOT devices often sense the physical world. Mirco Mechanical Electrical Systems (MEMS) devices sense physical properties like temperature, orientation and movement. Hence, these semiconductor devices remain inherently analog and require very specific test conditions.  IOT devices can be fully integrated on one device or they can be a System On Package in which multiple chips are connected via the package interconnect.  Either way analog testing is here to stay.  Which leaves us to explore alternatives to “Just Test the Specs.”  Do you have some specific analog circuitry, analog tests or Analog DFT that you would like me to discuss in a future article?  Leave a comment and I’ll put it in my writing schedule. Next up—more on the applications of the Stuck at Fault model with the goal of working up to a mastery level 3.

In Wikipededia there’s a thorough article on OpAmps.