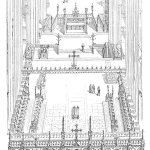 We are ready to learn how to analyze the data collected during the experiment.  This is the most exciting part of DOE!  We will cover the analysis in this article as well as the next several articles.

The following are the main steps to perform during the analysis:

First, we discuss the calculation of Main and Interaction Effects.  In an earlier article, we introduced Main Effects.  For 2-level designs, they are calculated as follows:

That is, for each factor, the main effect is calculated by finding the difference of the average responses when the factor is set “high” and “low”.

An example is shown below

So, for factor, X1, the main effect (E1) is found by averaging the responses where X1 is high and averaging the responses when X1 is low.  The result is the above example is 0.75, which means that as X1 goes from its low level to its high level, the response increases by 0.75 units, on average.  Note that just because the effect is not zero, it is not necessarily statistically significant.  Recall that experimental error exists, and only effects that are clearly bigger than the expected error are actually significant.  We will address testing for statistical significance in next week’s article.

As another example, we illustrate the calculation of E2 (Main Effect for Factor X2)

Here, the effect is negative which means that the response decreases as the factor increases from low to high.

We can construct Main Effect Plots by plotting the two average response values and connecting them with a straight line.  They are shown below for E1 and E2.

Clearly E2 is larger in magnitude than E1 but before we’d use these effects in a model, they must be tested for statistical significance.

Shown, together on the same plot, we have:

It’s a good idea to try and interpret these plots (for the significant interactions) to see if they make sense from a physical or engineering perspective.

The Main and Interaction Effect plots are a very useful way to help communicate the results of the experiment.  As we will see in an upcoming article, the effects are simply used to calculate the coefficients in our mathematical model.

« Facilitating FMEAs
Quality 4.0: What Does This Mean for the Quality Profession? »