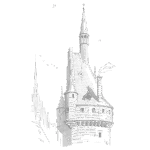 What readers will learn from this article.

This article introduces readers to heat transfer in heat exchangers. It explains the concepts of temperature gradients across walls and parallel- current and counter-current flows. Both shell-and-tube and plate heat exchanges are discussed along with their common operational problems and remedies.

Shell-and-tube and plate heat exchangers (HXCH’s) are recuperative type devices, meaning that flowing fluids exchange heat through a dividing wall. The exchange of heat occurs from the hotter liquid to the cooler one. The hotter liquid is at a higher energy level than the colder liquid and the energy flows from hot to cold in an attempt to reach a steady equilibrium state at an intermediate temperature.

HXCH’s cool or heat fluids (both liquids and gasses are used). Because a wall separates the two fluids a temperature difference exists from one side to the other. This temperature gradient, from hot to cold, forces energy to be transferred through the wall into the cooler fluid. As the cooler fluid absorbs energy, the hotter fluid loses energy. If it is necessary to cool a fluid to a required temperature then a colder fluid must be used on the other side of the wall. Conversely if a fluid must be heated to a required temperature then a hotter fluid must be used so an energy transfer can occur. Figure No. 1 shows a temperature gradient through the walls of a fouled plate HXCH.

When designing HXCH’s formulas are used that allow for the thermal resistance properties of the materials used and for the presence of a minor amount of fouling. Once fouling exceeds the design allowance the heat exchange may not be sufficient to meet process requirements. The ‘hook’ shape in the temperature gradient of Figure No. 1 just before the first solid surfaces is the resistance effect of the relatively still boundary layer at the wall.

Turbulence is another factor affecting the rate of heat transfer. If a still fluid is heated the heat has to be conducted atom-by-atom from one end to the other. This is a slow process. If instead the fluid is turbulent and jostling about then new atoms are continually making contact with hot surfaces and hotter atoms and the heat is transferred faster. Flows in HXCH’s need to be turbulent.

Fluids can be introduced into a heat exchanger from two directions. One with the fluids on either side of the wall flowing in opposite directions (counter) while the other has fluids flowing in the same direction (parallel). Figure No. 2 shows a graph of the temperatures for liquids in both flow configurations. Figure No. 3 shows a counter-flow shell and tube HXCH with the corresponding points at which the temperatures are taken for the relevant graph in Figure No 1. If condensing steam (or gas) or a boiling liquid were on one side of the HXCH then the temperature on that side stays constant and the line on the graphs would be straight. Condensation and boiling occur at a specific temperature for a specific pressure. For example water boils at sea level at 100oC. Similarly steam escaping into the atmosphere condenses at sea level at 100oC. Water can never be hotter than 100oC at sea level where the pressure is 101 kPa. But as the pressure rises so does the temperature that can be achieved, which is why a pressure cooker is able to cook food faster than using a standard open pot on a stove.

In parallel flow both fluids enter the HXCH from the same end at their maximum temperature difference. The heat transfer rate is a maximum at the start and gradually decreases along the length of the HXCH. As the fluids move through the HXCH their temperatures move closer toward some in-between value.

With counter current flow the two fluids are exchanging heat along their full length. The in-coming hotter fluid transfers energy to an already warmed out-going fluid. The heat transfer rate is more constant throughout the HXCH. The temperature of a fluid in counter current flow can be raised or cooled close to the incoming temperature of the hotter or cooler medium. This makes counter flow HXCH more efficient and they need less surface area than parallel flow HXCH’s to give the same result.

A shell-and-tube HXCH operating properly requires no involvement from personnel. The HXCH operates using natural physical laws and there no moving parts to wear out. However problems do occur, usually due to poor design decisions, material and workmanship defects or non-standard operating practices.

Material and workshop fabrication decisions are made at the design stage. Issues such as chemical corrosion resistance, galvanic corrosion compatibility, thermal expansion compatibility and methods of sealing tubes to end plates all affect the maintenance-free life of the HXCH. These choices must be correct at the start.

Use of defective tube and shell materials, poor welding, joining or fabrication procedures introduce time delayed maintenance problems. It will just be a matter of time before a failure happens. Proper specification and certification of materials, fabricators and their procedures may prevent some of these problems. The classic example is the eventual pin holing of stainless steel tubes by mild steel grinding splatter from workshops fabricating both materials.

Maintaining the designed heat transfer rates during operation is the responsibility of the operating department. Tube fouling must be monitored and remedial action taken before appreciable loss of performance. If the fluid mediums are corrosive to the HXCH materials then the corrosion rates can be monitored using test coupons of the metals placed in the flow circuit.

The design of plate HXCH’s produce their own set of concerns that must be addressed. In a plate HXCH a gasket separates the thin metal plates. The gasket acts to stop the contents escaping from the HXCH and to direct the flows within the HXCH. If incompatible gasket material is selected for the process chemicals and conditions then it will fail early. For example rubber gaskets have a limited temperature range. If the design selection assumes both liquids will be present and a rubber is selected because it will stay cool in the fluid flows then that will be a recipe for disaster. You can be certain that at some stage the hotter fluid will be put through the HXCH alone and it will cook the rubber gaskets.

Gaskets on large plate HXCH’s are very expensive and costly to replace. In-the-field maintenance of large plate HXCH’s is difficult and often unsuccessful. The plates must be evenly loaded and kept flat by screwing the thick end plates together. It is difficult to insure correct, even torque application to the tensioning screws.

Flooding is another common problem with plate heat exchangers using steam. The steam condenses into liquid (condensate) and unless the condensate is removed faster than it condenses the HXCH floods and heat transfer is lost. It is necessary to size the discharge piping and in-line equipment adequately for the worst load condition and not the average load condition. Another important factor in ensuring plate HXCH’s under steam operate well, is to be sure the condensate piping produces little back- pressure. A plate HXCH’s produces a large pressure loss across itself. To prevent condensate build-back the pressure at the outlet must allow free flow away from the HXCH.

The thin plates can vibrate due to the flow of fluid past them. The vibration will work harden the metal and make it brittle. Cracks will develop in the plates and cross-contamination occurs.

« FMEA Q and A – Special Characteristics in Process FMEA
Is Your Organization’s Planning Brittle? »