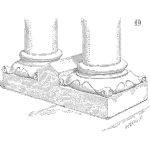 This nonparametric hypothesis test tests the equality of population medians. While not as powerful as the Kruskal-Wallis Test, it is useful for smaller sample sizes, when there are a few outliers or errors in the data as it focuses only on the median value.

One assumption to check concerns the similarity or equality of the underlying variances (or shapes) of the different populations being compared. An easy way to check this is to compare variances with a Levene’s Test, or simply fit distributions and compare shape parameters. Graphically the fitted distributions should have approximately the same slope on probability plots.

Another assumption is the samples are independent random samples.

Mood’s Median Test is useful to compare two or more groups of data to determine if they come from the same population or populations with equivalent medians.

There is no median difference between the groups.

At least one of the k groups has a different median.

Step 3. Calculate the overall median of all the data.

Step 4. Determine the number of observations per group less than or equal to the overall median.

Step 5. Determine the number of observations per groups greater than the overall median.

Step 6. Display the data with a two-way contingency table.

Step 7. Use the Chi-squared test for contingency tables.

Low values of chi-square would prove the medians are suitably the similar, and a high value would indicate that at least one median is significantly different than the others.

See the chi-squared test page for details on the test process.

« When to Do FMEA
When to Make a Reliability Prediction »