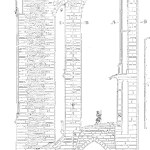 Net positive suction head losses (or why you can suck through a straw).

Pumps cavitate and run dry when the pressure leading into them falls below the vapor pressure of what they are pumping. At vapor pressure, the liquid boils into a vapor and fills the pipe.

The presence of dissolved gas in the liquid complicates the problem.

Why you can suck through a straw

When you understand how you suck liquid up a straw you will then have a good understanding of suction lift and its effect on net positive suction head (NPSH).

At the moment all around you is air.

The air has weight because Earth’s gravity is pulling it down. This weight is acting on the outside surfaces of everything.

When you put a straw into a glass of water and suck, you draw the air out of the straw into your mouth. The air that was in the straw has gone and you have created a vacuum inside the straw.

The vacuum you created in the straw is at a lower pressure than the air around you.

But the end of the straw is under the water in the glass.

So really you don’t suck water up the straw, but instead, the water is pushed up the straw by the air pressure around you.

All you do is make the vacuum in your mouth and then natural physics principles do the rest.

If instead of a straw we replace it with a pipe, and the vacuum made by your mouth is instead made by a pump.

We now have a situation where the pipe friction losses may be so much, or the end of the pipe is so far below the pump (the suction lift), that the vacuum made by the pump can fall low enough to boil off the liquid before it gets to the pump.

The NPSH is the difference between the pressure at the pump suction and the vapor pressure of the liquid.

Provided the NPSH pressure difference is well above the vapor pressure, the liquid will flow to the pump without boiling off and vaporizing (cavitating).

NPSH requires that we know two conditions at the pump suction.

The pressure difference between the liquid’s vapor pressure and the real pressure at the pump is called the ‘available NPSH’. The pressure lost along the pipe from the suction point into the pipe, through to the inlet to the pump is known as the ‘required NPSH’.

Provided the ‘available NPSH’ is greater than the ‘required NPSH’ the pump will draw the liquid to it and pump it out.

The pressure loss in the suction pipe consists of both friction losses and suction lift losses.

If the pump is located lower than the tank nozzle it is sucking from, and the pressure in the tank is not a vacuum (i.e. below atmosphere pressure), then suction lift is not present and only pipe friction losses need to be calculated.

If the vessel pressure is a vacuum then the amount of vacuum must be considered as an equivalent suction lift.

However, if the pump is located higher than the tank outlet nozzle, then at some point when emptying the tank, the liquid level will go below the top of the pump suction flange and suction lift develops.

The situation of having both pipe pressure friction loss and suction lift is shown in Figure No. 1.

The height of the suction lift needs to be added to the pressure losses along the suction pipe. 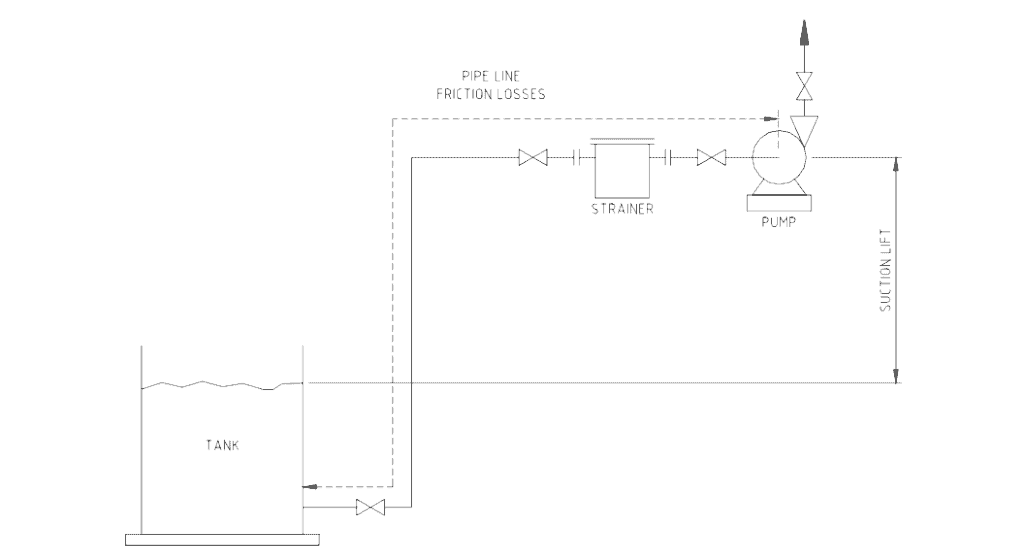 The effect of gas entrainment on NPSH.

Where gas is dissolved into the liquid, such as carbon dioxide in beer, or the liquid carries bubbles, such as air bubbles caught in water from cooling towers, the gas will separate from the liquid at pressures much higher than the vapor pressure of the liquid.

When making beer the pressure in the piping system after carbon dioxide injection is intentionally kept above the vaporizing pressure for carbon dioxide to ensure it stays dissolved in the beer and does not vent off.

In the case of the cooling tower pump, the air will come out of the water.

This air needs to be vented off.

The pump can be positioned so that the air can either go back out the suction pipe.

This means that the suction pipe is only partially filled and a larger diameter pipe may be needed to take both the water and air volumes.

Or the air can flow upward to the pump and go out the discharge pipe.

This will cause a suction lift situation. Or a venting tank or standpipe may be needed before the pump to let the air escape.

How to overcome NPSH problems

True NPSH problems only occur when the pressure in the liquid at the pump suction is near or below the vapor pressure at the temperature of the liquid.

You have two options to solve the problem. You can play with either, or both, the pressure and the temperature of the liquid at the pump inlet.

Some liquids have extremely high vapor pressures and are difficult to handle but these principles still apply.

It is to change the style of pump. If the pump were also able to safely pump the vapor as well as the liquid, then whenever the pressure fell low enough to create vapor the pump would still move the product.

The flow rates would be greatly reduced but no vapor locking would occur.