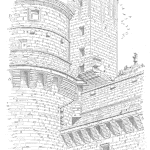 Before Norris-Landzberg’s study there was the work of Coffin and Mason.

One way to approach accelerated life testing is to use a model for the expected dominant failure mechanism. One such model is for solder joint low-cycle fatigue originally published by Coffin (1954) and Manson (1953), independently.

Norris and Landzberg proposed the plastic strain range is proportional to the thermal range of the cyclic loading (ΔT). They also modified the equation to account for effects of thermal cycling frequency (f) and the maximum temperature( T). They and other than empirically fit the parameters for the equation.

‘field’ and ‘test’ stand for use or field  and test conditions respectively.
Ea is the activation energy
k is Boltzmann’s constant
Ea/k for this equation is 1414

The fitted parameters m and n have been determined for SnPb eutectic solder to be 1/3 and 1.9 respectively. [Norris-Landzberg] A recent paper suggests the same formula and parameter values applies for lead-free (SAC) solder as well. [Vasudevan and Fan]

What does it do?

Understanding the temperature range of the use conditions and setting up a suitable test condition, permits translating the testing results to predict the field lifetime for the solder joints.

The model provides a basis for test design and estimating the duration of the testing suitable to replicate the field lifetime duration of interest. While not perfect, it does build on a lot of excellent work accomplished previously and significantly shortens the time and expense to estimate the time to failure distribution for solder joint fatigue.