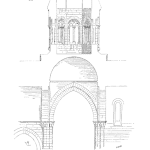 The objective is to estimate origin-destination (O-D) matrix proportions and travel time distributions, without individual data, and use the matrix and distributions to help manage traffic. The traffic model is a network of k-dimension M/G/infinity nodes and edges connecting them. Data are transient arrivals and departure counts, without individual vehicle identification. Within nodes individuals turn or go straight randomly. Reconstruct route information by product and convolution.

Pleasanton is in the armpit of the intersection of two major freeways: in the southeast corner of the highways 580 and 680 intersection. Freeway drivers cut through Pleasanton to avoid the congested freeway interchange. In year 2000, Pleasanton assigned city cars to follow cars getting off freeways and driving into the city to see where they went and whether they went through. Drivers complained about being followed. Popular sentiment and complaints stopped city cars from tracking people driving through town.

Pleasanton changed traffic signal timing near freeway exits to discourage drivers from driving through town. Stopped cars backed up onto the freeways and caused accidents. I offered to help.

The Pleasanton O-D and travel-time traffic model is a network of M(t)/G/Infinity self-service queuing systems [Keilson and Servi] with non-stationary Poisson arrivals. Analyses of this kind of model have been called “network tomography,” https://en.wikipedia.org/wiki/Network_tomography [Castro et al.]. Leonard Kleinrock, a fellow UC Berkeley grad student, made a career analyzing the packet-switching Internet as networks of queues, https://nationalmedals.org/laureate/leonard-kleinrock/.

Table 2. Simple O-D matrix. Body is proportion of inputs “From…” that go out “To…” “From 0” and “To 0” are those that originate in Pleasanton and those whose destination is within Pleasanton.

The Pleasanton traffic manager didn’t understand O-D matrixes, probability distributions, or their use for managing traffic. In year 2009, Pleasanton stationed cheap labor at major intersections around edges of city to record license numbers of cars entering or leaving Pleasanton. That gave some sample data to estimate travel times through Pleasanton by license number. Some tollway operators are doing that using license-plate readers, to cite speeders or suspend their toll passes.

It’s human nature to doubt statistically significant conclusions based on a sample that is a small fraction of the population.

Air travel surveys ~10%, on the day surveyors choose. Commuter surveys have non-response, bias. People asked, “Why are they surveying me?” I want Origin-Destination matrix  population proportions and travel time distributions, without sample uncertainty.

The M/G/infinity self-service system service-time distribution G(t) can be estimated, without customer identification! Imagine the supermarket analog of estimating the probability distribution of time in store. Observe supermarket arrivals and departures, starting from the time the doors open but without identifying individual shoppers. The reliability analog is to regard products or parts as entering self-service when sold or installed, departing when they fail (complaints, failures, return, repair, replacements, spares sales, etc.): data required by GAAP! The traffic analog is to regard traffic as going into and coming out of a network of M(t)/G/infinity self-service systems plus some originating or terminating in Pleasanton. That uses population data!

where the integral is from 0 to t.

Estimate distributions G1(t) and G2(t) from input, intermediate, and output observation counts. Refer to diffusion approximation to tandem or parallel queues, [George, 1973], for generalizations or approximations to non-Poisson inputs.

Imagine two crossing M/G/infinity self-service systems, one North-South and the other East-West. Customers from N-S may switch to E-W and vice-versa with probability p (Figure 1). Assume p and travel-time distribution G(t) are the same regardless of directions. Assuming symmetry gives you twice as much data to estimate p and G(t)

M/G2/∞2/p with one observation at time t

Suppose you observe output counts r1(t) and r2(t) at time t, then

Use least squares estimation when more than one observation gives multiple solutions. If underdetermined, minimize sums of squared errors, SUM[(observed-expected)2]. For example:

With multiple observations and different turn rates and travel times, p1, p2, G11(t), G12 (t), G21(t), G22(t) depend on whether you want answers at time t or for all (i,j) pairs. If the system of equations is overdetermined, take more observations. Solutions must be constrained to have 0<p<1 and G(t) increasing in t. I used Excel Solver

Imagine a network of intersection nodes and connecting routes. The whole thing could be modeled as a (filtration of) Markov process using states as node arrival and departure counts at arrival and departure times. Observe node inputs and outputs; inputs can have nonstationary rates. Assume stationary switching and travel time distributions. Route frequency is product of switch probabilities (assuming independence). Travel time is convolution of intra-node travel time distributions.

Sharminda Bera and K. V. Krishna Rao , “Estimation of origin-destination matrix from traffic counts: the state of the art,” European Transport no. 49 (2011): 3-23