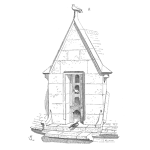 ANSI-IES TM-21 standard method may predict negative L70 LED lives. (L70 is the age at which LED lumens output has deteriorated to less than 70% of initial lumens.) Philips-Lumileds deserves credit for publishing the data that inspired an alternative L70 reliability estimation method based on geometric Brownian motion of stock prices in the Black-Scholes-Merton options price model. This gives the inverse Gauss distribution of L70 for LEDs.

Standards LM-80 and TM-21 define LED failure as lumens less than 70% of initial lumens; L70 is the age at which LEDs deteriorate to 70% of initial lumens. LED reliability, P[Age at 70% lumens > L70], is needed for estimating Mean Time To Failure (MTTF) and for maintenance and spares planning.

Standard LM-80 specifies the LED test method, durations, and sample sizes. Using “LM-80 test data for the LED chip we can then extrapolate using the TM-21 method which is basically an exponential function and formula to ascertain the L70 life in hours of the LED chip when it declines to 70% of its output” [ANSI IES LM-80, CALiPER] [https://www.liteonled.com.au/buying-guide/led-life-time/l70-lm-80-and-tm-21-data/]

The TM-21 method [ANSI IES TM-21] uses linear regression to fit a line to average normalized LED lumens (natural logarithm of Phi(t) lumens) at different operating times t in hours: ln[Phi(t)] = ln(B)-alpha*t, where B is intercept and alpha is decay rate constant. TM-21 specifies subset(s) of times t to be used for extrapolations; TM-21 doesn’t use the first 1000 hours of test data.  Confidence interval on L70 MTTF is obtained from statistics on the estimated regression coefficients. Would you believe the probability of negative L70 >0? This happens because some LED lumens output increases before it decreases.

After some initial variation, the logarithm of LED lumen measurements over time becomes normally distributed, so LED L70 reliability should have an inverse-Gaussian distribution [Bhattacharyya and Fries, Doksum, George, Wang and Xu]. The simplest model of LED deterioration is geometric Brownian motion with drift. The natural logarithm of the lumen maintenance ratio ln(L(t)) at age t could be described by the stochastic differential equation dlnL(t) = mu*ln(L(t))dt+sigma*ln(L(t))dW(t), where mu is the drift coefficient, sigma is the diffusion or volatility coefficient, and W(t) is Brownian motion. This is the stock price model that led to Black-Scholes-Merton options price model and LTCM, SIVs, CDOs, CDSs, risks and the 2008 financial crisis [Shreve].

This article uses lumen measurements from Philips Lumileds report DR-03 pages 5 and 23, data sets 1 and 4, at 0.35 A and 0.7 A (Amperes, current). Measurements were made according to IES LM-80. The page 5 and 23 data were lumen measurements normalized to 1.00 at 24 hours. The normalized data (aka lumens maintenance ratios [Cree]) were extrapolated “exponentially” to L70 ages. The extrapolation formula is L70 = ln(0.70/B)/alpha.

The extrapolation parameters appear to have been estimated from 1000-6000 hour lumen measurements by regression. Pages 5 and 23 of DR-03 also list “alpha”, “B”, and “r2” (R-squared) estimates and the L70 extrapolations for each tested LED. (Alpha and B are the intercept and slope regression parameters, respectively, and goodness of fit is indicated by r2, the square of a correlation coefficient. The fit is good if r2 is close to 1.0.)

Philips-Lumileds DR-03 provides sufficient data to estimate L70 reliability, and the data support the inverse-Gaussian L70 model. The partial correlation coefficient between LED test measurements averages ~0.3. After removal of the age factor, the Durbin-Watson statistic [https://en.wikipedia.org/wiki/Durbin%E2%80%93Watson_statistic] for each LED’s lumen measurements indicated little serial correlation, so LED tests might be statistically independent and the deterioration might occur in independent increments, conditions for Brownian motion.

Extrapolating 6000 hour LM-80 LED tests “exponentially” to 60,000 hours [RD-07] and 100,000s of L70 hours is overfitting (162 estimated parameters). The extrapolations don’t represent the variation (Figure 2). Deterioration appears to begin after a few thousand hours. Cree also reports that “lumen maintenance” after 5000 hours differs from earlier. Some alpha and B parameter estimates were inadmissible, resulting in negative L70 ages. The extrapolation parameters should have been computed from the 4000-6000 hour data.

The 4000 to 6000 hour lumen ratio measurements from DR-03 data sets 1 and 4 pages 5 and 23 appear to have a normal (Gaussian) distributions (figure 3). This implies that L70 has the inverse Gaussian distribution.

The solution to that differential equation is L(t) = exp[(mu – sigma^2/2)t+ sigma*W(t)] by Ito’s lemma [http://en.wikipedia.org/wiki/Ito%27s_lemma]. (I asked my Probability Theory teacher, Aram Thomasian, “What is Ito’s lemma good for?” He didn’t know either, otherwise we might have become rich from options trading.) Figure 4 shows parameter estimates from DR-03 page 5 data. The estimates of mu and sigma were made from the lumens maintenance ratios ln[L(t+dt)/L(t)], for all t £ 6000 hours. Correction for unequal age intervals took place in the computations. Drift coefficients are slightly negative, and the diffusion coefficient sigma is ~0.0001, after initial observations.

So compute L70 MTTF and reliability from the geometric Brownian motion parameters. This requires a transformation to positive drift. If lnL(t) = v*t+ sigma*W(t), then 1-lnX = min{0<t|lnL(t) = lnX} has the inverse-Gaussian distribution with parameters ln[X/v] and ln[X^2/ sigma^2], where X is a percent of original lumens such as L70 and mu = (v-sigma^2/2). The first parameter is the mean. To keep the parameter n positive, change the sign of mu to represent positive drift so that 1-lnX has the inverse-Gaussian distribution.

To extrapolate L70, extend each LED’s 6000-hour lumen measurement as geometric Brownian motion [Smith and Lánský]. This yields 80 L70 random variables with 80 independent, equally probable inverse-Gaussian distributions, so the sample distribution of L70 is a mixture of inverse-Gaussian distributions. Figure 6 shows this mixture reliability function. Its MTTF is 95,413  hours, median is 95,574 hours, lower 90% confidence limit on MTTF (B10 L70) is 93,128 hours, and the lower 10th percentile looks like 10 years. The standard deviation of the mixture is 10,201 hours. The Weibull reliability function in Figure 6 is from the positive L70 extrapolations in reference DR-03 page 5.

Philips Lumileds extrapolations of L70 ages and its confidence limit on MTTF strain credibility. The Weibull reliability function doesn’t fit well. Extrapolation, with different parameters for each tested LED, is overfitting. The wrong range of data appears to have been used for exponential extrapolations, which resulted in some inadmissible, negative L70 age estimates.

The inverse-Gaussian L70 and other reliability parameters can be computed from the geometric Brownian motion parameters and the desired percentage 70% or other. If you would like the workbooks that produced the figures, let me know.

Charles E. Smith and Petr Lánský, “A Reliability Application of a Mixture of Inverse-Gaussian Distributions,” Applied Stochastic Models in Business and Industry, Vol. 10, No. 1, pp. 61-69, 1999

« What Is Inherent Safety?
What is Preventive Maintenance and How are Task Intervals Assigned? »