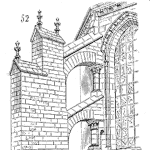 In the Monte Carlo method, one uses the idea that not all parts have the same dimensions, yet a normal distribution describing the variation of the part dimensions is not assumed.

As with any tolerance setting, getting it right is key for the proper functioning of a product. Monte Carlo method allows you to consider and use the appropriate models for the variations that will exist across your components.

The Monte Carlo method uses the part variation information to build a system of randomly selected parts and determine the system dimension. By repeating the simulated assembly a sufficient number of times, the method provides a set of assembly dimensions that we can then compare to the system tolerances to estimate the number of systems within a specific range or tolerance.

In short, we randomly select part dimensions and apply a transfer function (to simulate how the parts combine to create the final dimension) to create the resulting assembly distribution of dimensions. 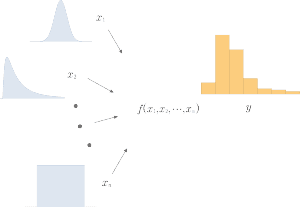 For a simulation to produce consistent results, it should use the number of runs that allow the result to converge with some defined margin. Commercial Monte Carlo software packages monitor the results after each run to determine the convergence and stop when the value remains within a pre-specified range.

One way to estimate the number of runs requires a two-step approach.

First, run the simulation for 1000 runs.

Calculate the standard deviation of the resulting values.

Then use the estimated standard deviation to estimate the number of runs m needed to achieve a desired sampling confidence with 1% accuracy:

where Zα/2 is the standard normal statistic for a two-sided C confidence, where α = (1 − C), with C being the statistical sampling confidence, commonly set to 95%, and Er(μ) is the standard error of the mean and is related to the amount of variation of the estimated mean.

Dividing the numerator and denominator by μ converts the terms to percentages:

Thus, Er(μ)/μ is the percentage accuracy (convergence threshold), and σ/μ is the relative standard deviation.

Step 1: Define the problem and the overall study objective.

What is the appropriate tolerance for individual plates used in a stack of five to achieve a combined thickness of 125 ± 3 mm?

Given the variation of the plate thicknesses, how many assemblies will have thicknesses outside the desired tolerance range?

Step 2: Define the system and create a transfer function that defines how the dimensions combine: y = f(x1, x2, …, xn).

Assuming no bow or warp in the plates, we find that the stack thickness of five plates is simply the added thicknesses of each plate: y = x1 + x2 + x3 + x4 + x5.

In this simple example, the five plates are the same and from the same population have a mean value of 25 mm and standard deviation of 0.33 mm.

Step 4: Estimate the number of runs for the simulation.

The five plates have normally distributed thicknesses of 25 ± 0.99 mm (a result that should converge to the same result as if using the RSS method).

Creating 15,000 runs with Excel may be difficult, if even possible.

Thus you may require the use of a Monte Carlo package such as Crystal Ball (an Excel add-on) or 3DCS Variation Analyst within SolidWorks. R software is another option.

For each of the five parts in the example, draw at random a thickness value from the normal distribution with a mean of 25 mm and a standard deviation of 0.33 mm. If you are using Excel the thickness for one plate can be found with =NORMINV(RAND(),,). Do this for each part in the stack.

Use the input values in the transfer function to determine the run’s result. In this example, we add the five thickness values to find the stack thickness. The sum of the five thicknesses for one run in Step 5 results in 124.238 mm.

Step 7: Repeat Steps 5 and 6 for the required number of runs (Step 4) and record each run’s result.

As with the RSS method, we can then calculate the percentage of assemblies that have dimensions within 125 ± 2 mm. We find that 99.33% fit within the defined tolerance when each plate is 25 ± 0.99 mm.

We can explore changing the part tolerance, if supported by manufacturing processes, to determine the impact on final tolerance.

If you assume or actually have part dimensions that can be described by the normal distribution, the Monte Carlo method results will equal the RSS method results.

If uncertain of the part dimension tolerance, use a uniform distribution. If you suspect the distribution to be centered within the tolerance range for the part, then use the triangle distribution.

Preferably, you should use an estimate of the actual distribution of part variation based on measurements.

When that is not possible, then use engineering judgment and manufacturing process knowledge to estimate the part variation distribution.
Vendors may have measurements of similar parts that may provide to be a suitable estimate for the distribution values.