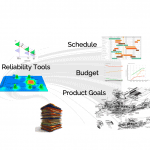 When it comes to product development, most technology companies understand the importance of reliability. In particular, the engineering teams usually have everything they need to design a reliable product, including the right testing tools and analysis methods.

At times, though, there can be problems. A product doesn’t ship on time. Or if it ships on time, it fails in the field.

Usually — and perhaps surprisingly — these problems aren’t caused by engineering. The engineers have done what they’re supposed to do, given the circumstances.

The problems come from higher up. They’re generated by the organization’s hierarchy.

That is, the leaders caused the product breakdowns through their leadership decisions. Or, more precisely, they caused problems through BAD COMMUNICATION of their decisions, and sometimes simply decisions that are wrong.

For instance, when it comes to talking to her product team, a leader might give each role on the team a very different goal. She might tell the project manager that their goal is a launch at the end of Q1 . . . and the R&D engineer’s goal is a particular new killer-feature . . . and reliability’s goal is a reliability of 99.99%.

What happens then? Conflict! The project becomes a scramble.

Instead of the team collaborating on the overall product, they’re competing with one another in narrow, limited ways. Each part of the team needs to achieve their particular goal at the expense of the other program goals. (After all, it’s personal. Each member thinks, “I’ve got to win. My job is on the line!”)

The result is a product launch that’s ridiculously unbalanced. The product may hit the market on time, but the important new feature fails in the customer’s hands.

When it comes to creating and releasing products that are innovative, popular, and financially successful, there’s an odd belief out there. Leaders think that when it comes to weighing factors, such as cost-point, time to market, and product features, there has to be harsh compromises. Fortunately, that’s not true.

Often, the reliability advancements that will help you produce a home-run product are “free.’” In other words, if you more effectively connect the engineering tools being used in the program with your company’s business goals, the reliability initiative will pay for itself. No additional costs or length. Hence, “free” in investment and profitable in return.

Consider the following scenario: Imagine you’re responsible for developing, not just any product, but one with life-and-death consequences. Let’s say your product is a surgical device that cannot be allowed to fail. No way, no how. Failure means human death.

Yet what happens? The product development program shortcuts the reliability process, knowingly. On top of that, every announced schedule-compression and budget-cut strikes the reliability team first.

The consequences of such behavior are obvious, foolhardy, and painful. I mean, there have been product issues before, major ones. History it seems is about to repeat itself. But why? Why are we headed into this horrible situation again?

I’ve also seen it throughout the years as an independent, reliability engineering consultant who works on numerous projects in parallel in multiple industries.

We so often do things that just don’t get good results. But we do them in that same way over and over again. The reason? We don’t know why what we’re doing isn’t working, so we don’t know how to do it differently. Change, however, is possible. We can understand why we’re messing up, and we can learn to do things, not just differently, but correctly.

As a reliability consultant, I have the unique position of being a “trusted advisor,” not only to an organization’s management, but to its executive leadership, too. Many of these leaders have been willing to give me latitude on the methods and strategies that have yielded great results. I’m appreciative for their willingness to go on these adventures with me.

Through these adventures I have created a tool set that greatly benefits the business getting the maximum ROI from their investment in reliability.  The tool set is called “Bounding” and the initiative is called “Reliability Culture.”  Simply put, Reliability Culture is a movement which studies and improves how strong reliability and profitable business connect.  Those who use it will learn how reliability plays a role in product success in the field.

I’ll be continuing to publish articles on the Bounding tool set and the Reliability Culture movement in the coming weeks. If these articles contain content that is interesting and helpful to you then you are in for a real treat later this year.  My new book “Reliability Culture” will be published by Wiley in the fall.