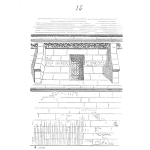 Seismic fragility refers to components’ or structures’ strengths-at-failures due to earthquakes. A seismic fragility function is the probability of surviving earthquake response stress, often peak ground acceleration. Post-earthquake inspections record damages and provide inputs for estimating subjective fragility functions and the correlations of strength-at-failures. Correlations are necessary for seismic risk analyses, because seismic stresses and components’ strengths at failures are dependent.

A fragility function is the cumulative distribution function of strength-at-failure, the complement of reliability as a function of stress intensity. Fragility functions are needed for reliability analyses as P[component Failure] = P[Stress > strength] = ∫R(x)dG(x), x=0 to ∞, where R(x) = P[Stress > x] and G(x) is the fragility function [Kennedy et al., Kapur and Lamberson, NUREG/CR 3558, https://accendoreliability.com/what-to-do-with-obsolescent-nuclear-engineers/]. Also, electrical generation failure (LOLP, Loss Of Load Probability) is modeled as P[Load > Capacity] or a multivariate version [George 1998, George and Wells].

Why multivariate? Seismic risk analysis of power plants is reliability computation of systems whose component failures depend on earthquake responses and whose strengths-at-failures may be statistically dependent. The system failure model is, multivariate P[g(Stress, strength)=failure]. System reliability is described by a “structure” function, g(Stress, strength), from fault-tree analysis. Components’ strength data is summarized in estimates of multivariate fragility functions of component strength random variables, including their correlations. This multivariate stress-strength analysis has been incorporated into risk analysis standards [ASME/ANS, ANSI/ANS, NRC, NUREG/CR 4334, IAEA TECDOC, EPRI].

This paper shows how to quantify:

In 1980, there was little relevant component strength-test data for seismic risk analysis. Components may have been acceptance tested but not tested to failure. Or they may have been tested to failure but not under earthquake loads. Kennedy et al. reported on experts’ opinions on means and 10th percentiles. I asked for experts’ opinions on fragility function percentiles.

We used least squares to estimate fragility function parameters: for normal, lognormal, and exponential fragility functions. The estimators were easily modified to accept weighted data. The weights were credibility ratings given by the respondents or by the data analyst.

Define X(I,q) as the q-th subjective percentile given by the i-th expert. The assumed model for X(I,q) is

where x(q) is the q-th population percentile of the reference population, assumed to be the aggregation of subjective fragility functions for all experts; and E(I,q) is a random variable with E(E(I,q)) = 0 and Var(E(I,q)) = σE2. The subjective percentiles from each expert were assumed to be uncorrelated. For each percentile, the model assumed the i-th expert’s opinion was randomly selected from the population of opinions of all experts. This is a simplification; it is doubtful that an expert’s opinion about three percentiles are uncorrelated, nor can it be expected that experts are independent sources of information.

Table 1 shows an example of parameter inputs for simulating expert opinion percentiles for equivalent lognormal and normal fragility functions. The means and standard deviations are small to avoid blowing up spreadsheet values and to avoid negative normal lower percentiles. Fragility function parameter estimates could be rescaled to compare with handbook values and to input to seismic risk analyses.

The normal equations yield, assuming experts give 10-th, 50-th and 90-th percentiles, the parameter estimators are:

where Xbar() is the average of the subjective percentiles offered by the n experts, and

In either assumption, the estimators of μ and σ are unbiased. Their variances are σΕ2/3n and σΕ2/(2nz(.9)) respectively. An estimate of the variation between experts is

Table 3 and figure 1 show the results assuming lognormal or normal fragility functions. The table 3 estimates agree pretty well with table 1 parameter inputs. The fragility function curves if figure 1 have similar shapes, because the lognormal and normal parameters in table 1 were chosen that way.

Experts’ opinions on percentiles gave estimates of mean strengths of common materials used in nuclear power plants that were pretty good, resembling handbook values. But experts overestimated standard deviations by as much as a factor of two [Kececioglu and Selstad]. Let me know If you want the spreadsheet that did the tables and graph or if the hypothesized fragility is exponential or other fragility function.

Define strength or capability of component to resist failure as S1, and S2 in mode 1 and 2 respectively. The marginal fragility functions of S1 and S2 are F1(s) and F2(s). Let R denote the stress seen by the component. It must have the same units as S1 and S2. The response cumulative distribution function is FR(r). The probability of component failure is P[S1<R OR S2<R] = ∫P[S1<s OR S2<s|R=s]dFR(s), where the integral is over s from 0 to infinity.

If responses causing the two failure modes differ but come from a common response, then transform responses R1 and R2 from common response R. For example, R1 and R2 may be maximum displacement and peak velocity, both of which are related to peak acceleration, R. Let g1(R) and g2(R) be known functions relating the responses to the common response R. The combined fragility function is 1-(1-F1(g1(s))(1-F2(g2(s)).

The analysis of a model with group effects and weighted experts estimates the fragility function parameters and the variation between experts within a group and between groups [Working and Hotelling, Karvetski et al.]. The latter estimates can help to quantify “uncertainty” in the parameter estimators due to differences between experts. [Please refer to the articles by George and Mensing for these methods, or ask me to reproduce them in spreadsheet form.]

The inputs are strengths-at-failures in order of magnitude X(i), I = 1,2,…,k. The original sample may be larger, of size m, including survivors of stresses greater than X(k). Subjective percentiles are denoted X(I,q).

The objective function for estimating the mean and variance of strength at failure, assuming strength is normally distributed is WD*SUM[(X(i)-μ-σ*z(i/m))2]+WS*SUM[SUM[(X(I,q)-μ-σ*z(q))2]] to be minimized over μ and σ. The weights WD and WS must be specified by the user.

For example, assume WD = WS = 1, and the 10th, 50th, and 90th percentiles are given by each expert. The solutions were derived analytically [George and Mensing]. I programmed the objective function for direct minimization using Excel Solver, for any assumed invertible distribution.

The mean and standard deviation combined estimates from table, 4, 2.732 and 0.2739, agree pretty well with normal parameters used to simulate the lognormal test data and the normal expert opinions.

The Bayesian procedure involves using the subjective percentiles to determine initial values for the parameters of the prior distribution, and then using the test data to evaluate the posterior marginal means for the lognormal mean and variance. These Bayes estimators are then used as estimators for the parameters of the lognormal fragility function. Please refer to the reports by George and Mensing. I will program them if someone sends subjective opinions and test data.

Earthquake responses are vibrations, so fragility functions could be and have been estimated from tests such as shaker table data. However, testing individual components or structures will never quantify dependence or even correlation unless multiple units are tested simultaneously on the same shaker table. That is reason to use field data from earthquake damage!

It is reasonable to expect that system failure probability increases, even at an increasing rate, with correlations ρ of component fragilities, depending on system “structure” function: ∂P[System failure]/∂ρ and ∂P[System failure]2/∂ρ2 are positive. It is important to quantify the effects of components’ strength-at-failure dependence [Baker, Bradley and Lee]. However, most seismic risk analyses involve creative methods to avoid quantifying dependence. [Fleming and Mikschi, Mosleh et al, NUREG/CR-5485 and 6268]. Probabilistic risk analysis (PRA) randomized parameters of simple risk analyses to represent uncertainty, lack of knowledge, and mathematically convenient approximations.

Assume jointly (log)normally distributed strengths-at-failures X1 and X2. Minimize SUM[Observed – Expected]2 or SUM[Observed – Expected]2/Expected over all experts and percentiles a and b. “Observed” = opinions on P[X1 > a|X2 = b], and “Expected” = ugly formula, derived in Mathematica, copied and translated into Excel cell formula and VBA. That yields pairwise correlations, which do not necessarily yield a positive definite (legitimate) correlation matrix.

Armchair probability or risk classifications used for screening components, such as FMECA, and RCM do not provide enough information to quantify fragility functions, reliability functions, failure rate functions, or their dependence [Aven]. Subjective opinions supplemented with seismic failure data conditional on earthquake do provide subjective fragility functions and their correlation matrix are required for seismic risk analyses. Earthquake data are available and preferred. I will help use it and combine it with subjective percentiles.

NAP, “Review of Recommendations for Probabilistic Seismic Hazard Analysis: Guidance on Uncertainty and the Use of Experts Treatment of Uncertainty,” National Academies Press, 1997

NUREG/CR-4334, “An Approach to the Quantification of Seismic Margins in Nuclear Power Plants,” U.S. NRC, August 1985