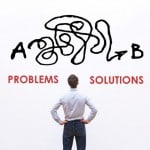 Whether you are new to FMEA or more experienced, these problems will challenge your skills. The intermediate/advanced problem uses an actual airline disaster to challenge readers with an FMEA problem, and practice identifying the elements of an FMEA.

If you haven’t yet read the article “Understanding FMEA Failure Modes – Part 1“, this would be a good time, as it presents fundamental information about failure modes.

On June 12, 1972 an American Airlines DC 10 lost its aft cargo door soon after taking off from Detroit. We’ll use this incident to practice identifying the elements of an FMEA.

Here is the background to the FMEA problem. McDonnell Douglas learned from cabin pressure testing that an improperly closed cargo door could burst open due to loss of cabin pressure, potentially resulting in the floor of the passenger compartment crashing down into the cargo compartment. The temporary solution was to put a vent flap in the door that would close by the same linkage that shut the cargo door, which would keep the airliner from holding pressure unless the cargo door was safely latched, thereby alerting the pilot to the problem. However, a bit of excessive force by a baggage handler shutting the door could make the vent flap close even though the cargo door was not fully latched. The DC-10 with the cargo door vent flap was put back in service.

On a brief layover before the Flight 96 leg to Detroit, a cargo handler had trouble shutting the rear cargo door, but managed to get it shut with a little extra force. Since the door-latch signaled “closed,” the warning light in the cockpit did not show a problem. However, the force the cargo handler used to shut the door bent a metal linkage on the inside of the door so that the door was not properly closed. The air pressure during ascent generated too much force on the bent door linkage and it sheared off the pins releasing the door. The cabin near the door collapsed and jammed the control cables to the tail. The rest is tragic history.

What is the probable failure sequence of the DC-10 cargo door?
1. Airline cargo handler uses extra force to close rear door, bending door pin. Door does not securely close.
2. The door vent flap does not trigger the electronic alarm, and the pilot is not notified the cargo door failed to lock securely.
3. The air pressure outside the cargo door drops during ascent, until pressure on the door from the inside causes the door-latch pin to shear. The cargo door blows out.
4. High-pressure air inside the cabin collapses the floor, resulting in hydraulic lines and cables becoming non-functional.

Check if your answer for the function of the door latch-pin is something like “to fully secure the cargo door in the closed position during all operating loads and environmental conditions without allowing the door to close unless fully latched.” Check if your answer for the failure mode is something like “Door latch pin bends under maximum stress loading.”

The next article is an FMEA Q and A. An interesting question about whether or not to update a System FMEA, when making subsequent changes to lower level items, is discussed and answered.