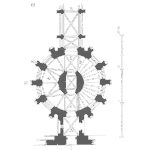 A lot of equipment failure results from just simple, plain mistakes, sometimes from unintentional forgetfulness, sometimes from ‘short-cut’ taking and sometimes because of ignorance of the consequences. The result is plant destroyed at great cost and inconvenience. But for plant being driven by an electric motor there is something that can be done very cheaply to protect it from being run outside of its design ‘envelope’.

The stator current draw characteristic is a good variable to monitor and use for a decision to stop the motor before it gets damaged. Anything attached to the motor will also stop. In this fashion the equipment is protected from any condition that produces a low power draw or any condition that causes a high power draw.

When an electric current flows through a wire it produces a magnetic field around the wire. The greater the current, the stronger the magnetic field. The magnetic field will induce electrical fields and cause current to flow in neighbouring wires. This phenomenon causes problems for process logic computer (PLC) equipment and field equipment communications because the electrical fields can interrupt signals sent between equipment and computer. In this case communication cabling is specially shielded away from power cabling. However the phenomenon is useful as a means of monitoring electric power draw.

By installing a current transformer onto a power cable the transformer develops its own current which is proportional to the current in the cable being monitored. Using a current transformer means there no wires to cut, the transformer is low cost, readily available and installation is quick. When coupled with a metering relay and a timer it is possible to turn off the power to a motor when the current goes outside set limits for a given period of time. If the limits are set to the current draw at maximum and minimum working situations and the motor is turned off when the limits are passed then the motor is protected from abnormal load conditions.

When a motor is freewheeling, or it is very lightly loaded, the current required to just turn the motor is only a small portion of the full load current. If such a situation develops when a motor in operation it is probably because something abnormal has occurred.

A typical low-load situation arises when centrifugal pumps are deadheaded against a closed discharge valve or if a downstream suction valve is shut and the pump is cavitating because it is starved of liquid. In this case undercurrent protection would detect the low load on the motor and turn it off. If the pump had a mechanical seal it would be protected from damage before loss of lubricating fluid across the seal faces destroys the seal.

Another situation where undercurrent protection would be useful is in the detection of unloaded conveyors or bucket elevators. They could be turned off automatically after a period of time. Anytime the components in a drive train fail, for example the shaft coupling breaks, or a drive shaft breaks or drive belts come off or snap, the motor load would suddenly drop and the fall in load current could be used to trigger a shutdown and/or an alarm.

As the load on an electric motor increases, the spinning rotor starts to slip more and slow down. The electric current draw rises as the motor tries to maintain speed. The higher current flow causes more heat to develop inside the motor. The heat builds up and can destroy the motor’s internals. The motor fails due to being overloaded. Here again current detection can be used to shut the motor down and protect it and/or raise an alarm.

Overloads are likely in bulk materials handling situations such as bucket elevators and screw feeders. Where equipment has to combat a dragging, digging or scraping action as part of the process, sudden overloads should be expected. Over-load protection should be incorporated into the original design.

Allow for the Operating Requirements

There are times when motors are required to free wheel for a short period or there will be a short, temporary overload situation. An example is when a pump sending liquid into one tank is required to send liquid into an alternate tank. For a short period both tank’s valves may be closed. It is often better to keep the pump running for a few seconds against a deadhead rather than to put it off and restart it. In this case the motor current will intentionally drop low but do not want the undercurrent protection to stop the motor.

The timer is used to prevent the motor shutting down unnecessarily. Observations are made of normal operating duty current draws and delays to permit normal operation, such as high current draw at start-up, are set into the timer. The current protection only activates after the timer counts out in the presence abnormal loads.

There is one issue to be weary of when using current protection. It is possible to have a ‘false’ load on the motor. As long as a motor experiences ‘normal’ loads the current stays within the permitted operating band. Should this load be the result of a part failing, e.g. a collapsed bearing or a slipping vee-belt, then the current could still be in its working band and the protection will not operate.

Current protection is a cheap, simple way to protect your equipment against those unexpected and unforeseeable errors that happen.

« Enterprise Risk management is Not a Standalone
Building a Reliability Culture »