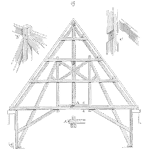 Let’s say the results of software testing averaged three defects per 10,000 lines of code. The criteria for release is 90% probability of 5 or fewer defects per 10k lines.

If this product ready for release?

The Poisson distribution is appropriate here as it is useful for modeling defects per unit, count per area, or arrivals per hour. If the data, in this case, the defect count per lines of code to be modeled by the Poisson distribution, the probability of an occurrence (defect in this case) has to be proportional to the interval (lines of code in this case). Also, the number of occurrences (defects) per interval must be independent (more on statistical independence in another post).

The cumulative distribution function is the sum of the probability density function.

Some references may have a table for the cumulative distribution and helps to avoid many calculations for each term in the summation.

First, we need the estimate of μ which is given as three defects per 10k lines. Now, we can start the calculations.

The product meets the criteria for release.