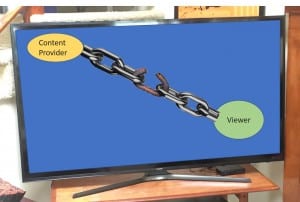 A Crisis in the Home IT department

If you are the head of your home IT department, you may relate to this tale

Last night my wonderful wife Stacy was riddled with angst over the disruption of her binge watching a spy series, a mild crisis with our own IT hardware.

The cause of her disappointment was the failure of our new large screen Ultra High Definition (UHD) Smart TV to deliver a drama series with a reasonable picture and sound quality.

The failure mode was a choppy video stream and intermittent sound.

It was so bad she was reading the closed captioning while watching a series of almost jumping video frames. She was freaking out.

Who is to blame?

With me being the only engineer in the house, and according to our gender division of labor, I was expected to solve this reliability of service problem, and soon.

As would most non-technical users, she did not care who was the provider of a long service supplier chain that was the weak link.

Next, she blamed the TV manufacturer for causing the failure of service. I thought that may be possible as I had previously had to power cycle the program because of the failure of an app to load, and the power cycle did fix that problem.

The long chain of potential culprits

It is funny that we still call these amazing displays and systems “Televisions”, now that they are basically computers with amazingly detailed large displays.

They are complex systems with many suppliers of interdependent hardware and software in the chain of delivery. Everything must work together to successfully deliver content to the viewer.

As the capabilities and quality of Television and the internet increase and start blending into one system of content delivery adds many more potential causes and suppliers of reliability failures.

With our new UHD TV, we can access movies and TV shows from a satellite system provider, as well as the internet.

These days we are watching much more original content from the internet streaming content providers such as Amazon Prime, Netflix, and YouTube along with others. The reliability of being able to watch movies and shows from the cloud shifts now to our ISP (via DSL) provider’s signal.

The use of ISP for TV content adds many hardware and software nodes to the chain, not all under the control of the provider.

What is most likely and what is the easiest solution?

My first thought when I saw the TV failure mode is that our ISP provider was at fault. It was possible that the data rate, the Mbps (megabits per second) download rate had dropped due to our Wi-Fi or local internet traffic loads being heavy, slowing the system.

So my first thought was to the easiest of the solutions, and one solution I had “fixed” many failed IT systems both in my professional career and at home – simple–

TURN IT OFF and TURN IT ON!

It was back to normal again.

My wife was gleeful and expressed deep admiration for my IT prowess.

Rushing to fix it!

In my desperation to please my most important IT client (my wife), back to making the streaming series watchable again, I made a common error with failure cause isolation and trying to determine the element that was at the cause of the failure.

I erred in that I reset two hardware systems in the signal chain simultaneously.

I unplugged DC power to the DSL modem and plugged it back in to reset the access to the DSL signal.

For the newer Smart HDTV’s,  Using a remote control on/off does not really reset operating software in the system,  so I power cycled the TV by pulling out the AC power cord, waiting a few seconds, and reconnecting it.

Conflict of priorities challenge to finding the root cause

The solving of an IT problem at home illustrates a common problem in the real world of electronics field reliability.

In most cases, the emphasis is on getting the customer back up and running, as was the case when I was repairing semiconductor high vacuum systems. Time was money, and so most field repairs use the method of “shotgunning” by replacing many hardware subsystems simultaneously.

It is best in the short term for the customer, but it makes for many parts being sent back that have no defect which is one of the many contributors to the NDF (no defect found) problem.

NDF continues to be a big challenge in finding the root cause of the failures.

As our home entertainment, as well as other consumer electronics, become more dependent on cloud services and internet signal quality, we are adding many more interconnections, apps, and links in the delivery chain controlled by many more companies making hardware and software.

These many tiers of hardware and software make it more difficult to isolate the root cause of service failures.

But sometimes it doesn’t work and it’s not known why.

Fortunately, for most “soft failures” of digital systems are fixed with rebooting or power cycling.

We may not know what causes the failure, but we are just happy it works again.

Ask a question or send along a comment. Please login to view and use the contact form.
« The Top 5 Signs of a Reliable Plant
RCA – Show Me the Money »