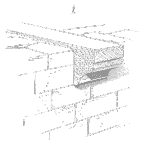 What readers will learn in this article.

Too much stress in metal will cause it to fail. Failure can occur by putting the metal under a once-only load greater than it can take or by continually loading the metal cyclically with a high load less than the breaking load (metal fatigue).Stress & Strain in Metals Under Loads

Stress occurs when forces pull (tension), push (compression) or act in combination on a material. When a force is applied the material reacts by distorting to counterbalance the force. A greater force will cause a correspondingly greater distortion until the item breaks.

Stress is the force applied per unit of cross-sectional area square to the force. Its formula is –  Stress (σ) = Force / unit of area

Strain is the amount the material deforms from the unloaded state when the force is applied. Its formula is –  Strain (ξ) = Change in length / original length

Strain has no units, as it is a ratio of length divided by a length. It  represents a proportional change in size.

When a force is applied to a metal deformation occurs and it is strained. The more the force the more the deformation (strain). This relationship is recognized in Hooke’s Law and is shown in Figure 1 for two types of metals.

Figure 1 indicates that metals have an elastic region where load and strain are proportional (a straight line on a graph). In this region the metal acts like a spring and when the load is removed the deformation (strain) reduces and it returns to its original shape. If instead the load increases, the strain (deformation) rises until a point is reached where the metal can no longer sustain the load and it yields. The yielding can be gradual as in the left-hand plot of Figure 1 or it can be sudden as in the right-hand plot.

The aim of much of the work in metallurgy is to discover how to extend the yield point further because in doing so we can fabricate items using thinner metals for less cost.

At the Molecular Level

The behaviour of metals under load is a result of their atomic arrangement. When a material is loaded it deforms minutely in reaction to the load. The atoms in the material move closer together in compression and further apart in tension.

Consider the atomic bonds as being springs separating the atoms as shown in Figure 2. The springs are squeezed together in compression and pulled when in tension. The amount an atom moves from its neighbour is its strain. As a force is applied the atoms change a proportionate distance.

The reason metals have such low strengths is because of imperfect atomic structures in the crystal lattices which make them up. Often a row of atoms will stop mid crystal and a gap is created in the atomic structure. These gaps act as huge stress raising points known as dislocations.

Effect of Applying Load on a Material

It is the presence of dislocations in metal that allow deformation at low levels of stress. Eventually so many dislocations accumulate that insufficient atoms are left to take the load and the metal yields. Figure 3 indicates how the dislocation moves through the crystal.

It is fortunate dislocations are present in metals for they allow us to form and shape metals using less energy than if they did not exist. Their presence requires us to be aware of how to prevent them from accumulating at grain boundaries so that they will not eventually lead to the failure of the item.

Table 1 shows some of the common methods used to reduce the influence of dislocations.