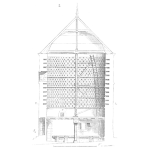 Rupert Miller said, “Surprisingly, no efficiency comparison of the sample distribution function with the mles (maximum likelihood estimators) appears to have been reported in the literature.” (Statistical “efficiency” measures how close an estimator’s sample variance is to its Cramer-Rao lower bound.) In “What Price Kaplan-Meier?” Miller compares the nonparametric Kaplan-Meier reliability estimator with mles for exponential, Weibull, and gamma distributions.

Ships and returns counts, (sums of period returns in bottom row of table 1) are statistically sufficient to make nonparametric reliability and failure rate function estimates. Ships and returns counts are modeled as inputs and outputs of M/G/infinity self-service systems. The output of an M/G/infinity self-service system is a Poisson process with rate λG(t), where λ is the Poisson process input rate and G(t) represents the service time distribution function, one minus the reliability function. If λG(t) is nondecreasing, then majorization yields the nonparametric maximum likelihood estimator of the reliability function R(t)=1-G(t) [George and Agrawal].

Our article was published in the Naval Research Logistics Quarterly (NRLQ). It was about estimating service time distribution G(t) from input and output counts of an M/G/infinity self-service system with Poisson input process. Seymour Selig, then editor of NRLQ, asked me, “What is the precision of the estimator?” (the nonparametric maximum likelihood estimator from ships and returns counts) I didn’t know, but I knew how to find out.

The hypothesis of stationary Poisson process input to an M/G/infinity self-service life system is testable. Goodness-of-fit tests could be used test the Poisson assumption. The usual test is based on the observations of the times between the individual units shipped.

The hypothesis of a nonstationary Poisson process M(t) inputs to an M(t)/G/infinity system is not fully testable, The Poisson assumption is testable, if not too nonstationary. Use the Z-test (approximate normal distribution) of (ΔM(t)-E[ΔM(t)])/√E[ΔM(t)], where ΔM(t) is number of inputs around time t, bootstrapped with different interval widths.) However, the hypothesis of independent increments is not testable unless you have multiple sample realizations from the Poisson ships process for the times t under observation. Period inputs such as ships counts provides a sample of size one for each time increment, so the assumption of nonstationary Poisson ships is not fully testable; i.e., the assumption of nonstationary Poisson is hard to refute.

“Well Duh!” you may say. A sample does not contain as much information as the population from which the sample is taken. In reliability statistics, sample and population data may be censored. With reliable products, there may not be very many failures. A sample may not even have failures. I checked several other Nevada table data sets, and dividing counts by 10 and rounding off often resulted in zero failures.

Table 1. Part of the Nevada table 1/10 data sample from the 10-month table in [http://www.weibull.com/hotwire/issue119/relbasics119.htm]. The bottom row lists monthly returns regardless of which ships cohort they came from.

Furthermore, the sample Kaplan-Meier estimator is more biased than the maximum likelihood estimator from the same 1/10 sample’s ships and returns counts! This occurred for the Nevada table of 10 months of data (in the previous article about uncertainty [George 2022]), divided by 10 and rounded off to integers (table 1).

Figure 3 shows that the 1/10 sample reliability estimate, from ships and returns counts, is about the same as the population estimates. The bias of the reliability estimator from ships and returns counts appears negligible, because sampling returns, sums of grouped life data, are less likely to be rounded off to zero than individual months’ grouped failure counts by cohort in the body of the Nevada table.

Estimator variance or standard measures reliability uncertainty. It is beginning to be accounted for in reliability based design [Coit and Jin, Shi and Shen, Wang et al.]. This report compares the standard deviations of sample estimators vs. population estimators, and compares the standard deviations of the Kaplan-Meier estimator from grouped failure counts vs. the maximum likelihood estimator from ships and returns counts. The standard deviations are the square roots of Cramer-Rao lower bounds on variances, the asymptotic variances of population maximum likelihood estimates [Borgan, https://en.wikipedia.org/wiki/Cram%C3%A9r%E2%80%93Rao_bound].

Greenwood’s variance formula for the variance of the Kaplan-Meier reliability function estimator is the asymptotic Cramer-Rao lower bound (table 2 and figure 4). It is the reliability function R(t) squared times the sum of Deaths/(At Risk*(At Risk-Deaths)) summed over months, R(t)2*∑D(s)/(Y(s)*(Y(s)-D(s)), s=1,2,…,t. Surprise! Dividing deaths D(s) and numbers at risk Y(s) by 10 increases the standard deviations (table 2 and figure 3) by a factor of the square root of 10!

Statistical efficiency refers to how close an estimator’s sample variance is to its Cramer-Rao lower bound (CRLB). The CRLB on the reliability estimator variance-covariance matrix is minus the inverse of (the expected value of) the second derivative matrix of the log likelihood function (aka Fisher Information matrix). Maximum likelihood estimators achieve the CRLB asymptotically, under some conditions. Columns two and three of table 3 are the CRLB standard deviations of the maximum likelihood reliability function estimates from the ships of table 1 and returns (bottom row of table 1). The last two columns of table 3 are the standard deviations of the Kaplan-Meier reliability function estimates from 1/10 sample and population data. I added the standard deviations for R(4), reliability at age 4 months, for comparison.

Don’t believe the confidence bands on Kaplan-Meier reliability estimates at the bottom of Non-Parametric Life Data Analysis – ReliaWiki. They’re confidence limits valid at one age, based on Greenwood’s variance estimate and normal distribution statistics; they don’t mean the entire reliability function estimate will lie within the confidence bands for 95% of the ages. Hall-Wellner confidence bands do [Hall and Wellner]. They use the Cramer-Rao lower bounds on the variance-covariance matrix of estimators.

The asymptotic distributions of maximum likelihood estimators are multivariate normal distributions, so the variance-covariance matrix should be used to construct approximate (asymptotic) confidence bands on reliability or actuarial failure rate function estimates, for confidence or tolerance limits on actuarial forecasts.

Robustness of estimators usually means insensitivity to outliers. However, if data is censored, robustness also includes insensitivity to the distribution(s) of censoring times or their distribution if random. Grouped failure counts in a Nevada table (table 1) are censored by the fact that the oldest cohort is 10 months old, the second oldest cohort is 9 months old, etc. The robustness of the Kaplan-Meier estimator is known [Huber].

Table 5. Entropies of alternative estimates from sample uncensored and censored with an exponential distribution with mean 1000 periods. Censored entropy values are the averages of 10 simulations.

When I worked for Apple Computer I estimated the age-specific field reliability of all computer products and their service parts from product sales, bills of materials, and parts’ returns counts.

I asked Mike, the Apple Service Department accountant, if he wanted help estimating warranty reserves based on the field reliability of Apple products and their service parts? He replied, “No thanks. We already do that based on last year’s warranty reserves, costs, and sales.” I asked him what if you’re wrong? He said, “We just take a charge or a credit depending on actual warranty costs.” Extrapolating time series is like driving by looking backward. Forecasting based on observed field reliability is like driving by looking ahead, because reliability drives the demands for warranty returns or service parts [Buczkowski, Kulkarni]. I wondered what Apple could have done with money squirreled away in warranty reserves?

I wrote a computer program for service providers to forecast spare parts’ demands and recommend stock levels based on service providers’ installed base. When service providers used my computer program to estimate spares stock levels, they found that they had been required, in the past, by Apple, to buy spare parts that had become obsolescent. I was put in charge of buying back $36,000,000 of obsolescent spare parts and distributing the charges over three calendar quarters. That used to be a lot of money wasted (in 1992) by guessing instead of using field reliability to recommend spares stocks. Parts were crushed.

The Kaplan-Meier estimate, from a sample of grouped failure counts, could be biased, depending on how you take the sample. The sample Kaplan-Meier estimate also has about the same standard deviation as the nonparametric maximum likelihood estimate from population ships and returns counts! These observations on one data set may not generalize, but why take a sample of life data when the population estimator from ships and returns counts has smaller standard deviation? Use the Kaplan-Meier reliability estimator only if you can afford the cost of tracking every product and service part in the installed base by name or serial number from sale or shipment to end of life or suspension.

The standard deviations of the Kaplan-Meier population estimates are less than those from the maximum likelihood estimates, from population ships and returns, but the difference diminishes with age t. The entropy (information) in the Kaplan-Meier estimator is greater, because the Nevada table contains grouped failure counts by cohort. Period returns counts could have come from any earlier ships cohorts.

L. L. George, “A Note on Estimation of a Hidden Service Distribution of an M(t)/G/Infinity Service System, unpublished, April 1994, https://docs.google.com/document/d/1ZyFTsDaPRYh2a4o9J_MF5ioDLnxEAFC4HJJcKZcLz2A/edit?usp=sharing/

A. S. Nemirovskll, B. T. Pol-yak, and A. B. Tsybakov, “Rate of Convergence of Nonparametric Estimates of Maximum Likelihood Type,” Problemy Peredachi Informatsii (Problems of Information Transmission), Vol. 21, No. 4, pp. 17-33, Oct.-Dec.,1985