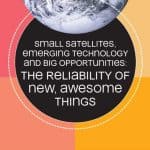 Two rockets launched from Earth in November 2013. They carried a total of 61 small satellites from 20 different manufacturers. A satellite that is less than 500 kg in mass is considered ‘small.’ But small satellites are unique in many other ways. Old and ‘big’ satellites are massive, multi-billion dollar machines that take years to build and are the ‘only shot’ at achieving a mission. A ‘big satellite’ that stops working is a disaster. If a ‘small satellite’ fails, there can be many others floating around Earth to pick up the slack.

Returning to the two rockets that launched in 2013. Each set records in terms of the numbers of satellites they launched. It wasn’t that long ago that there was only ever one satellite on any launch vehicle. And the February 2017 launch of the Indian Space Research Organization’s (IRSO’s) Polar Satellite Launch Vehicle (PSLV) raised the bar higher, successfully deploying 104 small satellites.

Small satellites are a disruptive technology. New (non-traditional) organizations are pushing satellite design boundaries as once prohibitive capital costs become a thing of the past. Startups can now be major players in the satellite industry, with large contractors and governmental agencies quickly losing market share. And with this paradigm change, growing pains kick in. Sound familiar?

The satellite industry (in its broadest sense) is not keeping up with the technology – particularly when it comes to reliability. Manufacturers, customers, regulators and service providers are trying (and failing) to understand how to ask for (and get) reliable small satellites.

The advent of small satellites resulted in us coining a new term: constellation. I know – this is not a ‘new’ term. We don’t mean groups of stars when we talk about constellations in the same sentence as small satellites. A constellation is a group of satellites that are working together toward a single mission, function or service. But this is such a new concept, it hasn’t infiltrated the ‘language of satellite reliability.’ Every text, standard, guide or book on satellite mission assurance is written as if there is only a single satellite for a particular task. This means that we focus on making this single satellite reliable. But what about launching more small satellites with average or even ‘poor’ reliability instead?

Let’s say we have a choice between launching a single satellite that has a mission reliability of 90 per cent, or four small satellites that each have a mission reliability of 50 per cent. Which scenario do we go for? This is a basic reliability question with a clear answer. We launch the four small satellites, as this creates a constellation which has an aggregate mission reliability of 93.75 per cent. This should be an easy thing to incorporate into our thinking. And it is often much cheaper to manufacture more unreliable things than a few highly reliable things. But decades of practice and schools of thinking take a long time to change direction. Particularly with governmental agencies and militaries that have incredible layers of bureaucracy.

A glimpse of the future made possible by small satellites is provided by Planet.com (formerly known as Planet Labs). This company has a single mission: to image every element of Earth’s surface every day. And they have launched around 200 small satellites, forming multiple constellations, to do this. And perhaps the success they have enjoyed thus far is because they ‘own every part of the process.’ They create (and in some instances buy) small satellites to adjust the size of their satellite fleet accordingly. There are no interfaces between manufacturers and customers, as they are focused on selling imagery only.

But it almost painful to watch a customer talk with a small satellite manufacturer when they are trying to work out how many satellites they need, and how reliable they should be. Because often, the customer (not really knowing what to ask) reverts to mission assurance guides and standards that are hundreds of pages long, containing hundreds of separate activities and tests. This may fit within a multi-billion dollar budget. But it becomes economically untenable for a small satellite that costs around $ 1 million (which is a tiny amount in the satellite world). If a small satellite manufacturer undertakes every activity contained within these guidebooks, budgets and schedules are perhaps tripled. So lose the opportunity to purchase three small satellites and replace it a single satellite plus a compliance-centric framework. And this framework focuses on many things that are not relevant for small satellites.

For a ‘smart’ industry, things can be collectively very dumb. But before we go on, let’s look back.

The history of small

In the early 2000s, CubeSats became a thing. CubeSats, also known as nanosatellites, involve modular construction of 10 cm cubic units that sees their mass typically fall below 10 kg. They were routinely dismissed by the broader satellite industry as too small to be effective. Organizations like NASA that focused on creating single, expensive ‘big’ satellites did not anticipate the revolution these CubeSats would inspire.

So what happened to make them mainstream? CubeSats started out as university projects for students. Being as small as they were, it was well within many research budgets. And while no one anticipated there true potential, there was an obvious educational benefit in students making these tiny devices. And after these students made these CubeSats, they were launched. And many of them worked really well.

Ironically, NASA is now heavily involved in the CubeSat industry either through direct financial stakes or acting as a ‘broker’ of standardization and terminology. And the once dismissed CubeSats now provide data and imagery to many companies and institutions (such as Google).
The list of cost-effective small satellite applications is increasing by the day. The space industry, which is vocally proud of its ability to ‘see’ over the next horizon figuratively and technologically, were not close to understanding what small satellite technology had to offer.

The graduate students who learnt how to make CubeSats at their respective universities started forming their own companies and created their own commercial small satellites. Not bound by decades of satellite manufacturing dogma, they invented new practices, a new business model, and a new small satellite industry. But they lacked the ‘language’ skills to talk with big governmental customers in a business development, systems engineering and contractual setting. More commercial customers became interested in the technology (see Planet.com), and the rest of the world slowly started to take more notice.

And there are still many problems to be solved.

Small satellite reliability is an issue – a typical issue for emerging technologies. Michael Swartwout of St Louis University does his best to keep track of the status of all small satellites. He determined that around 40 per cent failed to reach orbit or fulfil a mission objective. University-manufactured satellites that (without manufacturing corporate knowledge) have a lower probability of around 20 per cent. And the overall figure could be lower still given that commercial manufacturers are less forthcoming with (bad) statistics.

And why are we here?

I recently worked with some small satellite industry organizations. This has not been my first involvement with an emerging technology, but I thought it may be useful to summarize my thoughts and observations. Many of the enduring challenges of making something that is both new and reliable were evident in these small satellite pioneers. And they are not going away soon.

And as opposed to other emerging technologies, small satellites find themselves within an old paradigm. That is, they are truly new devices, but being treated in the same way as their older, bigger predecessors. This makes small satellites uniquely interesting (and often frustrating) when we see how historical approaches to satellite manufacture clash with new design paradigms. This highlights many human and organizational psychological issues, which will hopefully make this topic interesting.

This article is the first in a series that looks at some of the challenges the small satellite industry is facing as it forges a new way. Components that used to be the size of fridges are now the size of matchboxes. They way they operate are fundamentally different. So why are so many people pretending to not see a difference?

An important concept that is used is that of mission assurance. This is a term that is used, misused and roughly analogous to reliability. These articles address what mission assurance should actually define. And we also talk about small satellite reliability, along with what that means for making them more reliable. This series also looks at similar assurance experiences in other industries, including industries that have at one time or another genuinely believed that what they were doing was ‘good enough’ despite evidence to the contrary.

I will briefly jump to the end and outline my key conclusion here: many emerging technologies (including small satellites) are dangerously influenced by a compliance centric framework with respect to reliability. Compliance is backward looking. What worked for the old thing does not necessarily applicable to the new thing. Performance is all that matters, and by constraining engineers to do pre-determined activities we are robbing ourselves of the benefit of critical thinking. We also create a culture of ‘fearing to deviate’ even when the science says we need to.

What this series is not

A checklist of what needs to be done to ensure the reliability of emerging technology.

How can it be when it argues against checklists? What this series aims at doing is to start you thinking about what it takes to create an organization that inherently values reliability and using this as the ultimate form of reliability or mission assurance. This means that critical thinking replaces blind adherence to consensus driven practices and activities. And this is scary to many – particularly governmental customers who are conditioned to prize certification over science.

If by the end of this series you have perhaps a more open or questioning mind regard how to make a new product reliable, then it has been a success. But even this reliability engineer needs to concede that failure is always an option – even when it comes to writing articles.
The next article starts to look at compliance-based frameworks for reliability and mission assurance. That is, why they don’t work – but why we use them anyway. Till next time!

« What Can You Do With Data?
Coaching and Learning for Engineering and Basketball »