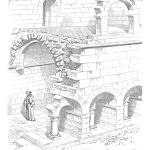 Who did what and to whom and with what?

The Engineer sent part ships and valid returns data from population and Customer, grouped by calendar month (table 1). The Customer’s data consisted of five months of ships and returns.

Table 1. Ships and returns for HP population and Customer. Ships in Jan-93 included last quarter of 1992.

The HP Manager said that table 1 HP data was not representative of then-current production (1995). So the Engineer also provided a sample of valid ships and failure dates from 16 failed units out of 257 in May 1995 (table 2). This sample was used to check the validity of the population reliability estimate from all ships and returns and the Manager’s claim.

Figure 1 shows that the reliability estimates from population data (“pop mle”) and the sample of 16 failures out of 257 (“sample emp”) agreed tolerably. The disagreement between reliability estimates in the first year of age could have been due to population sell-through time or return delays not in the sample of 16 out of 257. The sample and population monthly return rate function estimates in figure 2 shows some warranty returns in and after the 12-th month, and wearout or annual maintenance effects around age 24 months but no infant mortality. The maximum likelihood estimates of HP population and Customer reliability functions differed in magnitude and shape (figure 3). The difference was so obvious that I didn’t test the null hypothesis that the two reliability functions were the same.

I assumed the HP population returns were from the entire installed base. Agreement with HP population and sample reliability function estimates in figure 1 supports this assumption. There were some HP sample data entry errors. Three return dates were earlier than the population data. The HP sample was treated as 16 times-to-failures from all returns in the recorded shipments.

What else could be done with the age-specific field reliability estimates? These population estimates showed actionable features: infant mortality (Customer, figure 3) and apparent wearout or maintenance effects (HP population). Each could be dealt with.

Figure 1 showed population wearout beginning in the second year. HP expected this part to last much longer. Design defects cause premature wearout. However, this part’s apparent wearout may have been due to periodic system maintenance. To fix, look for design or maintenance related return modes or repairs. Don’t forget, verify the fix! How? Compare age-specific field reliability before and after.

« A Proposed Classification For Reactive Chemicals
Risk is Round »